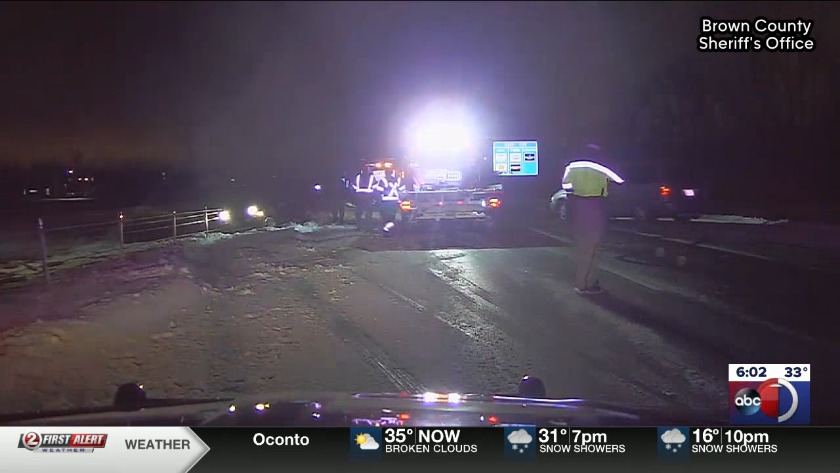 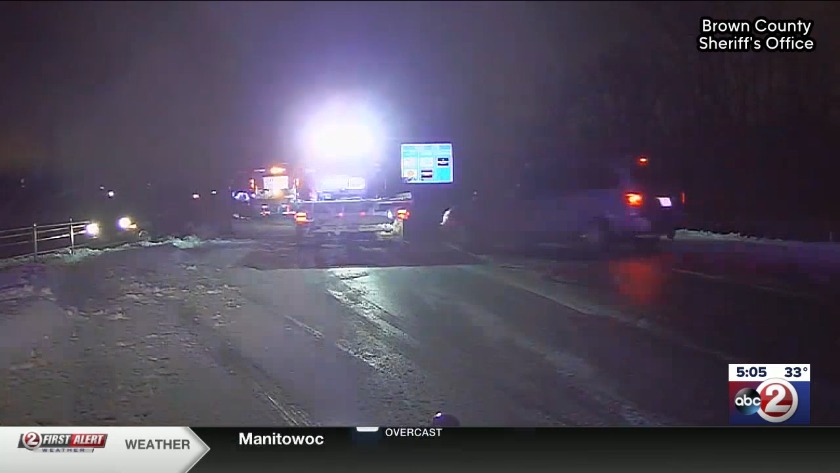 Deputies say they are incredibly lucky no one was injured or killed and are relieved they avoided even more accidents in that snowy weather.

A Brown County deputy's squad car captured that video Sunday night, just before 8:30 on 41 north of Lineville Road, where they were responding to another accident.

The whole thing actually starts about an hour before that, around 7:30 p.m., when a Brown County sheriff's deputy pulls up to an accident in the southbound lanes.

A vehicle was in the snow on the side of the road, hung up on a cable barrier.

The deputy's emergency lights are flashing, warning drivers to slow down and move over, and many do.

A tow truck pulls up, soon followed by a county snow plow.

Both add even more emergency lights to the scene, and all the deputies, tow truck operators and other crews on scene are wearing reflective vests.

"Some cars were slowing down probably in the 30-40 mile an hour range. Some were in the 50-mile an hour range, but at speeds that were unnerving if you were a pedestrian along the highway trying to help somebody out," says Brown County Sheriff's patrol Lt. John Bain.

Emergency responders can be seen working in front of the tow truck and closer to the median, where the initial crash is located.

Their location at that exact moment is something they can only say now was lucky for what happens next.

Mere seconds later, you hear tires squealing, then a minivan flies into frame backwards, spins all the way around and comes to rest just inches from the tow truck.

The crews on scene rush toward the sound.

"We also have another vehicle that spun out," says a dispatcher over the deputy's radio.

"You cringe. Things happen so fast, and people get hurt so fast," says Bain.

After a few seconds the van deputies say was driving too fast for conditions is able to pull away untouched.

The deputy approaches the woman driving the van, telling her, "Okay, alright. As long as nobody's hurt. Lesson learned. Slow down. Take your time, okay."

The woman is expected to be cited for losing control.

"This strikes more fear in officers than a lot of other calls do, because there's so much less control. We can block the lanes and we can get our lights on, but after that, everything is out of control. It just depends on how fast the next random person coming down the road is and if they're paying attention to what's going on," says Bain.

He says there was absolutely luck involved keeping anyone from being hurt, especially since the van stopped sideways in the only open lane of traffic for about 15 seconds.

Bain says this shows how quickly conditions can change.

"I think this is super important. Slow down, but continue to focus on the roadway. Don't let the lights blind you. Don't spend all your time looking at the crash and trying to figure out what's going on, but stay focused on the roadway and keep driving," he urges.