Highway crews feel better prepared for next round of rain 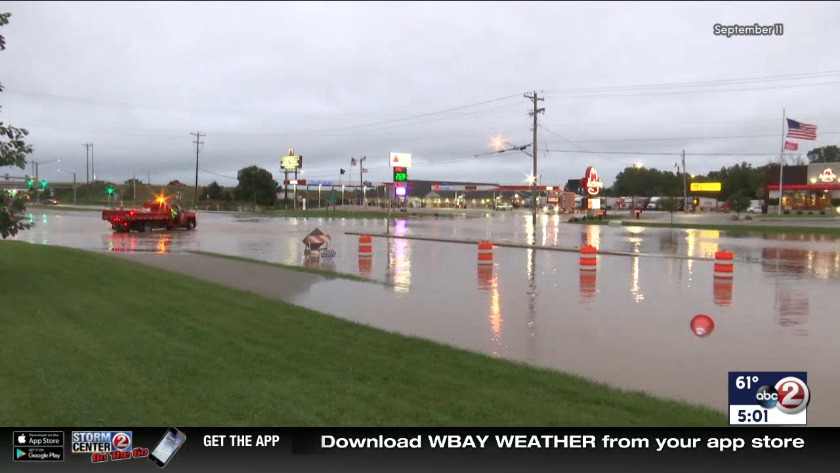 BROWN COUNTY, Wis. (WBAY) - Round two is on the way. Flash Flood Watches are in effect for a large portion of Northeast Wisconsin as more heavy rain is expected to fall Thursday night into Friday morning.

"Moderate to heavy rainfall is expected later this afternoon and into tonight as a cold front sweeps through the western Great Lakes region," reads the National Weather Service Statement. "The combination of additional heavy rainfall amounts of 1 to 2 inches today and tonight with already wet soil could lead to rapid runoff and areas of flash flooding."

Crews left barricades and barrels out so they are able to quickly alert drivers of road closures.

Wednesday's storms forced evacuations and road closures in the flood-prone east side of Green Bay, Bellevue and Allouez.

Officials are keeping an eye on Bower Creek by County GV in Bellevue. The county evacuated some people in the GV area during Wednesday's flooding.

"I do have sandbags made already on our highway shop ready to go,. so if municipalities do need more we'll be ready to accommodate that," says Fontecchio.

City and county officials will be on call for flood response.

"We also have on call highway superintendents that will be watching the flood prone areas as the rain starts coming down," says Fontecchio.

Brown County Emergency Management will be working with first responders.

"A lot of it is just the people that are the boots on the ground seeing information that is happening in the county and relaying them to us," says Lauri Maki, Brown County Emergency Management.

For now, it's a waiting game.

"I hate to say that practice makes perfect, but you kind of know what to do after you've done it a few times," says Fontecchio. "You know -- there's not much you can do you, watch the road. You know what to look for, we're prepared for it. We're just ready for it."

StormCenter 2 meteorologists say 2019 could easily break the wettest year record. As of Sept. 11, Green Bay had 35.34 inches of precipitation. The current record is 39.21 inches. That was set in 2018.

"It would be shocking if we didn't break it," says StormCenter 2 Chief Meteorologist Steve Beylon. "We could be at 37 or 38 [inches] by the end of this week."

American Red Cross disaster teams are handing out free flood cleanup kits Thursday from 9 a.m. to 4 p.m. The kits include mops, gloves, trash bags and bleach. The kits are available at the American Red Cross Office at 121 Bader St. in Green Bay. pic.twitter.com/QBkQGssnjg

1-2" of Heavy rainfall will bring more flooding concerns to northeast Wisconsin late this evening through early Friday morning. The National Weather Service has issued a Flash Flood Watch through tonight. Turn around, don't down. pic.twitter.com/wdIX9MX1Pq

WEATHER AWARE DAY: City of Green Bay and Brown County officials are prepping for round 2 of rain coming to the area.
Here on County HWY GV equipment is already out and ready. @WBAY pic.twitter.com/W0HgW7lWdG

WEATHER AWARE DAY: Round 2 is on the way for more rain showers in Northeast Wisconsin. Here’s a look at Bower Creek. The water is still high from yesterday. I can only imagine how high it’ll be after tonight’s showers. @WBAY pic.twitter.com/oO9rS4WXhB