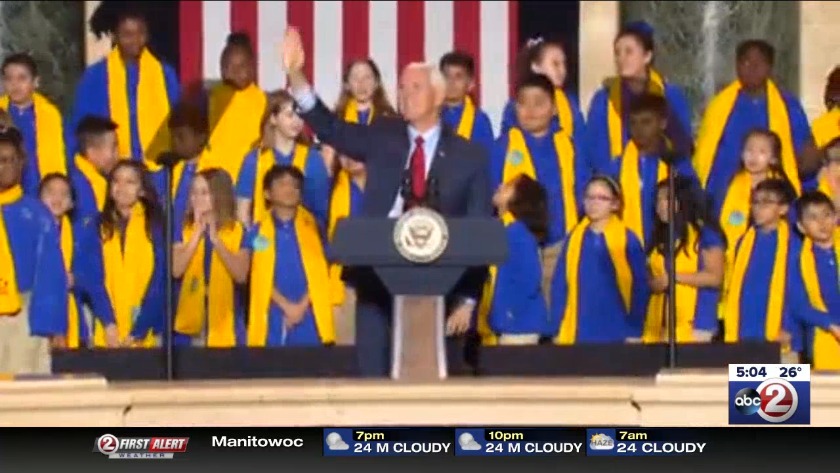 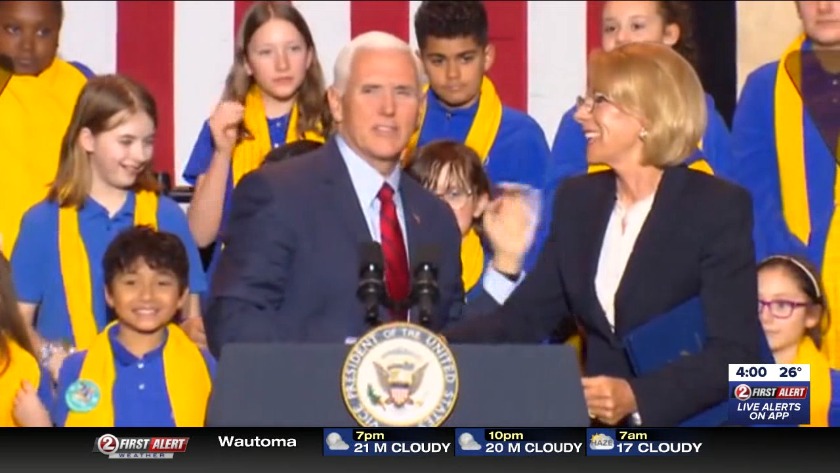 "I'm here in Wisconsin because this is where it all began," said Pence. "Thirty years ago Gov. Tommy Thompson made history when he created the first school choice program."

The VP also credited former Gov. Scott Walker for pushing for a statewide school choice program. "More than 40,000 students are able to attend the school of their choice," said Pence of Wisconsin's program.

Pence says he and President Donald Trump are working with Education Secretary Betsy DeVos on a new program that would provide more than $5 billion in funding to school choice programs across the country.

Pence also touted the administration's tax reform policy to allow parents to use college saving accounts to fund education on all levels.

Students are starting to show up at the Wisconsin State Capitol ahead of Vice President Mike Pence’s visit this afternoon. He is expected to talk about the state’s school choice programs, celebrating National School Choice Week. pic.twitter.com/YzO23gFYrQ

Pence says many of the children who benefit from school choice come from "under served communities that face unique challenges."

"Thousands of African American and Hispanic parents that wouldn't be able to do otherwise have been able to choose where their children go to school in Wisconsin," said Pence.

"At choice and charter schools Hispanic American students perform better in math and in English," the Vice President stated.

The Associated Press reports it is believed to be the first time a sitting member of the executive branch has appeared at the State Capitol. Democratic Wisconsin Gov. Tony Evers was not in the building for the vice president's visit.

A group of about 50 protesters who do not support school choice programs were in the rotunda for the vice president's address. They yelled "shame" and booed while Education Secretary Betsy DeVos addressed the crowd. The protesters support more taxpayer funding for public schools.

The Democratic Party of Wisconsin held a news conference Tuesday morning to address what the party says are the "Trump Administration's broken promises on education."

“When I see things like Donald Trump and Mike Pence and Betsy DeVos cutting funding to public education, it frustrates me. It frustrates me because I know there’s tons of other folks here in this community who need access to these resources," said José Rea. "If we can’t keep that up, people are going to continue to fall through the cracks. Our public education system should not be about profit...We already lived through the days of Scott Walker gutting our public school education here in Wisconsin and now we’re seeing it at the federal level. We cannot go backwards. We cannot go through that again and our kids’ future -- and therefore all of our futures -- are on the line.”

Wisconsin is considered a coveted battleground state for the 2020 Presidential election.

The Democratic National Committee will hold its convention in Milwaukee in July.