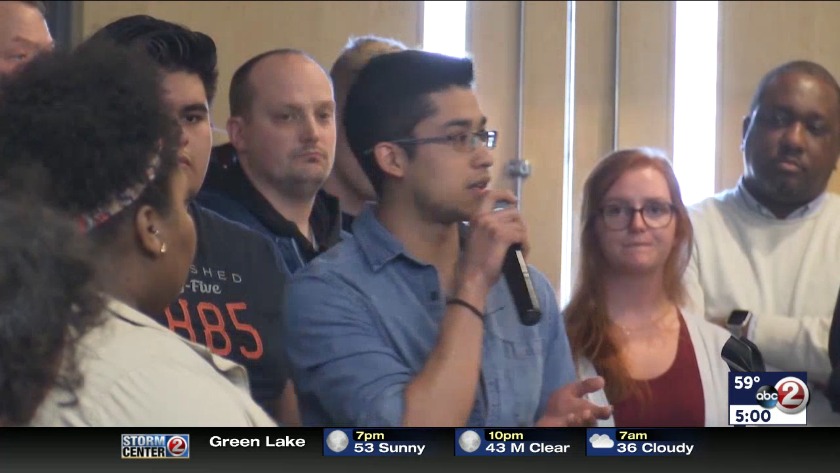 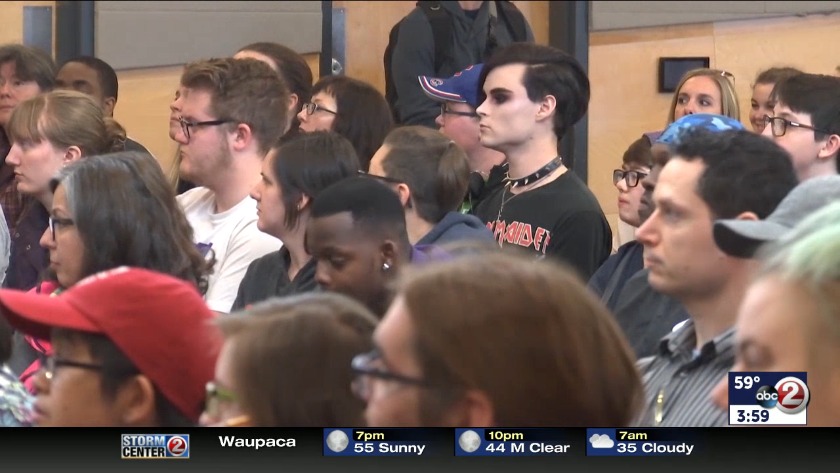 OSHKOSH, Wis. (WBAY) - UW-Oshkosh's chancellor and students are denouncing racist imagery that was photographed in a student's off-campus residence.

Chancellor Andrew Leavitt says he was made aware overnight of the racist and homophobic messages that were captured in photos posted to social media.

Photos posted on social media include a sign that reads:

There is also a banner with what appears to be a Swastika.

Chancellor Leavitt hosted an open forum at Reeve Memorial Union Friday, and students filled the seats. They joined together to condemn hateful messages.

"I thought it was just really sad. This isn't the first time that this has happened, so I'm just really disappointed," says Kiara Petty, UW-Oshkosh sophomore.

"It's just really frustrating that you have people like that hate people openly. It's kind of disappointing," says Elashia Rosado-Cartagena, UW-Oshkosh sophomore.

Leavitt said students who bring hate to the college community are not welcome and encouraged to leave.

"I'm angry. I'm angry this has happened. This has disrupted the lives of many faculty, staff and students. We have many students that don't feel safe on our campus right now and that's just wrong," Leavitt said. "And we're going to do everything in our power, as a community, to talk through this and come together and stand against hate."

"This is not a place for hate, this is a place for learning," Leavitt says. "We want all of our students to feel safe. They need to be in the right frame of mind in order to learn."

Leavitt, university officials and campus police have opened an investigation. The sign and the Swastika were at an off-campus home, but the incident involves university students. That makes it the unversity's issue.

"We need to make sure we understand exactly what happened. If there were any policies or law violated in this and if there were we'd take the proper sanctions to remedy that," Leavitt says.

Some students find hope in the strength of numbers. The large attendance at Friday's forum shines a light on people who are united against hate.

"I'm proud in the fact that something is being done but we've had this before. I think there comes a point where you have to draw a line and show some consequences, show zero tolerance, get these people out of our environment," says Nicholas Metoxen, UW-Oshkosh senior.

Lawmakers in Madison are also reacting to the images. State Sen. Lena Taylor (D-Milwaukee) released this statement: “Hate speech and activities promoting intolerance have to be addressed as soon as it happens. It is good to see such a quick response to the overnight incident of racist and vile images that surfaced near the UW-Oshkosh campus. Thank you Chancellor Leavitt, faculty and students for your willingness to be a voice for others.”