Trump rallies supporters in Wis. as Democrats debate in Iowa 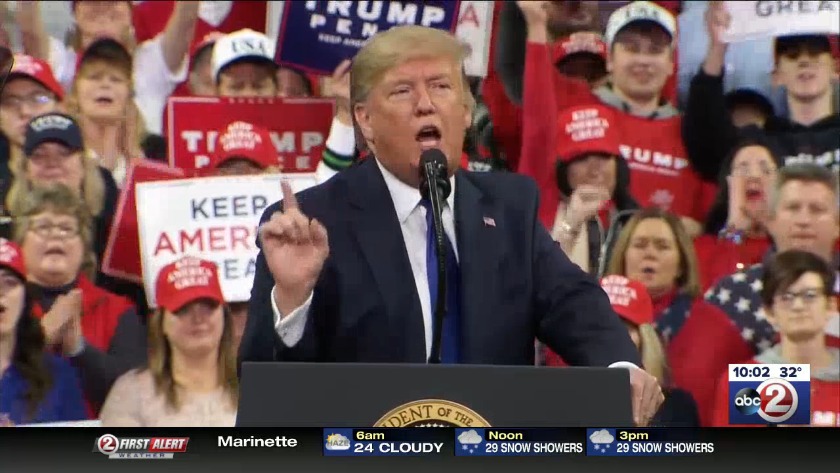 MILWAUKEE (AP) — President Donald Trump defended his decision to kill a top Iranian general and slammed Democrats as weak on national security as the Democratic presidential candidates prepared to take the stage for their final debate before primary voting commences.

Offering his own counter-programming to Tuesday night’s debate, Trump appeared in battleground Wisconsin as Democrats gathered next door in Iowa, which holds its kickoff caucuses in less than three weeks on Feb. 3.

In front of a crowd of thousands in downtown Milwaukee — not far from where Democrats will hold their convention this summer — Trump took on the leading Democratic candidates, including Vermont Sen. Bernie Sanders.

“Bernie and the radical left cannot protect your family, nor can they protect our country,” Trump told supporters at the University of Wisconsin-Milwaukee Panther Arena.

“When you do that you can’t really recover,” Trump said.

While Democratic voters try to decide who is their best candidate to take on Trump, the president has been contending with the House vote to impeach him. After weeks of delay, the House will vote Wednesday to send its articles of impeachment to the Senate. Republicans hold the majority in the Senate and there is nowhere near the 67 votes needed for Trump’s removal.

Winning back Wisconsin is a key part of Democrats’ 2020 strategy — and one of the reasons the party chose Milwaukee to host its national convention in July. Trump won the state by fewer than 23,000 votes in 2016, cracking Democrats’ long-held “blue wall,” along with Michigan and Pennsylvania. Trump is expected to make frequent return visits in the coming months as he works to maintain his edge.

Vice President Mike Pence warmed up the rally crowd by praising Trump and panning the Democratic candidates as too far left for the state.

“You know, I heard they’ve got another debate tonight. If it’s anything like the other ones, those people are going to be standing so far on the left I think that stage is going to tip over,” Pence quipped.

Trump supporters began lining up Monday evening outside the arena to make sure they would be able to get inside.

“I think the Wisconsin vote is very important, very important,” said Brenda Stoetzer, 60, from Hickory Hills, Illinois. “And we need to just spread the message here that, you know, Trump is helping the people, the ordinary people. He’s not making the rich richer. He’s making everyone richer.”

“I think he’s done right by the whole country,” agreed Nancy Freye, 65, who lives in Madison, Wisconsin. “He’s fighting for all of us every day. I don’t know how you can even get anything done, but he does. So good for him and for us.”

Trump spent much of the rally defending his record, including his decision to order the strike that killed top Iranian General Qassem Soleimani, whom he labeled the “world’s No. 1 terrorist.” Trump’s decision came under intense criticism from Democrats and raised questions about whether it really prevented an imminent attack, as some Trump administration officials have claimed.

“The Democrats are outraged that we killed this terrorist monster, even though this monster was behind hundreds and hundreds of deaths,” Trump told the crowd, adding that “thousands of people” don’t have legs and arms right now “because of this son of a bitch.”

Democrats, he said, “should be angry about his crimes, not the decision to end his wretched life.”

Meanwhile, Trump’s son-in-law and senior adviser Jared Kushner held an event to highlight the administration’s criminal justice reform efforts with Republican Sen. Ron Johnson of Wisconsin. Trump signed the First Step Act, a law designed to overhaul the criminal justice system, reduce the number of people in prison and help former inmates rejoin society. It was a rare bipartisan victory, with backing from black leaders and lawmakers who forged an allegiance with Trump.

Democrats and Republicans are trying to win over black voters in big cities such as Milwaukee that will play a huge role in deciding who will become the next president. Lower African American turnout in 2016 was part of what helped fuel Trump’s victory.

One of those organizers in Milwaukee, Angela Lang, said Kushner’s event seemed like an attempt to woo minorities. But she said Trump shouldn’t assume that all black voters care about is mass incarceration and criminal justice reform.

“Everyone knows when you come to Milwaukee that’s code for black and brown voters,” she said. “But black voters are more than just single-issue voters.”

Associated Press writers Kevin Freking in Washington and Carrie Antlfinger in Milwaukee contributed to this report.

A look at how some of their claims compare with the facts:

Trump has argued that the updated trade agreement with Canada and Mexico will pay for the wall because of economic benefits he predicts will come from the deal. Nothing in the trade agreement would cover or refund the construction cost or require a payment from Mexico.

Instead, he is assuming a wide variety of economic benefits that can't be quantified or counted on. For example, he has said the deal will dissuade some U.S. companies from moving operations to Mexico and he credits that possibility as a payment by Mexico.

The agreement preserves the existing liberalized environment of low or no tariffs among the U.S., Mexico and Canada, with certain improvements for each country.

Although his 2016 campaign left open the possibility that Mexico might somehow contribute to the cost indirectly, Trump repeatedly roused his crowds with the straight-ahead promise: “I will have Mexico pay for that wall.”

TRUMP: “We’ve created 7 million jobs since the election including more than 1 million manufacturing and construction jobs. Nobody thought that was possible.”

THE FACTS: Those numbers are less impressive than Trump claims.

Government figures do back the president’s statements. But the job gains under Trump over the past three years were lower than during the final three years of Barack Obama’s presidency. More than 8 million jobs were added during that period under Obama, including 1.2 million combined in manufacturing and construction. What these figures suggest is that much of the job growth under Trump reflects the momentum from a recovery that officially began in the middle of 2009.

TRUMP: “Our military has been totally rebuilt.”

THE FACTS: It hasn’t.

It’s true that his administration has accelerated a sharp buildup in defense spending, including a respite from what the U.S. military considered to be crippling spending limits under budget sequestration.

But a number of new Pentagon weapons programs, such as the F-35 fighter jet, were started years before the Trump administration. And it will take years for freshly ordered tanks, planes and other weapons to be built, delivered and put to use.

The Air Force’s Minuteman 3 missiles, a key part of the U.S. nuclear force, for instance, have been operating since the early 1970s and the modernization was begun under the Obama administration. They are due to be replaced with a new version, but not until later this decade.

(Copyright 2020 The Associated Press. All rights reserved. This material may not be published, broadcast, rewritten or redistributed.)