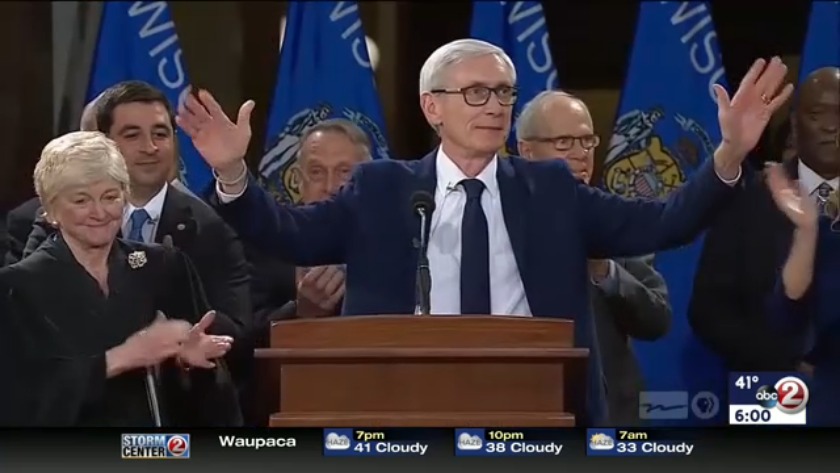 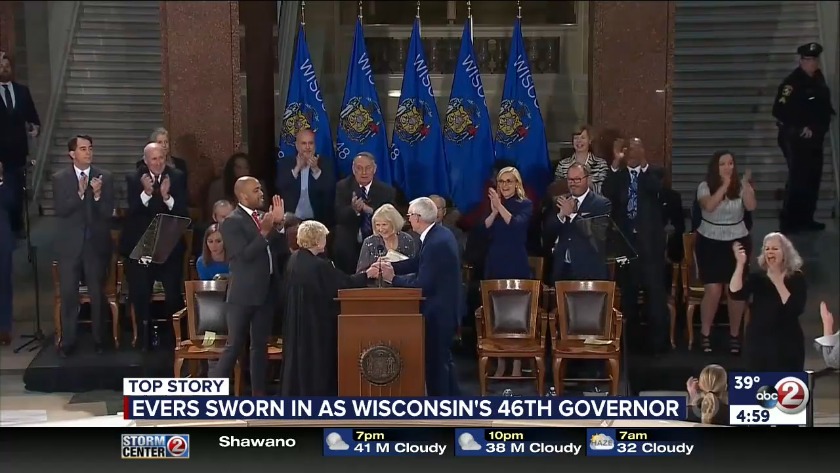 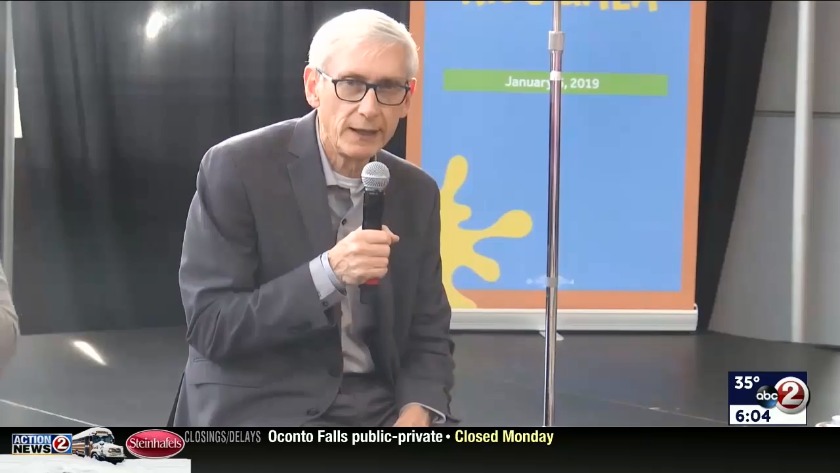 VIDEO: Evers to be sworn in Monday

"I'm incredibly proud to be the 46th governor of the great state of Wisconsin," Evers said to rousing applause at the Wisconsin State Capitol in Madison.

Both chambers of Wisconsin's Legislature are still controlled by Republicans, but having the new government in place will give Democrats the power to create compromise or gridlock.

Evers' message: Set aside partisan bickering and turn the page on politics of the past.

"We've gotten away from who we are and the values that make Wisconsin great. Not Democratic or Republican values but Wisconsin values: Kindness and respect, empathy and compassion, and integrity and civility," Evers said.

Evers, a Democrat who led the state's Department of Public Instruction, defeated two-term Republican Scott Walker during the Nov. 6 election. Walker and four other former governors sat behind Evers at the inauguration ceremony in the Capitol rotunda.

Speaking before a very big crowd, Evers quickly touted his agenda, calling on the state to fully fund public schools at every level.

"Folks, this is bigger than me. This is about the people of Wisconsin. It is about setting aside political interests and personal ambitions to work together on solving problems," Evers said. "

"Let's polka tonight and get to work tomorrow," Evers said as he wrapped up his speech. It was followed by the refrains of "On Wisconsin!"

Rep. Jim Steineke (R-Kaukauna) told us afterwards, "I was surprised by Gov. Evers' tone. He struck an optimistic tone moving forward about cooperation and working with the other part, so that's something I am excited about. So, I am hoping he is focusing on those issues that can unite us rather than those issues that divide us."

Steineke and other Republicans expressed concerns about Evers' plans for spending.

"Every dollar we spend is a dollar we have to take from a taxpayer, and I'm going to be very careful with that. I think my Republican colleagues will as well," Rep. Ron Tusler (R-Harrison) said. "I hope he doesn't ask for too much, but if he asks for a few things, we're going to do everything we can to make everyone happy, including him."

"I think the public is behind an agenda that invests in education, that invests in infrastructure and that expands health care access. Those shouldn't be partisan issues, and I'm hopeful we'll get the votes necessary," Rep. Gordon Hintz (D-Oshkosh) said.

It was an historic day for Mandela Barnes. He was sworn in as Wisconsin's first African American lieutenant governor.

"Above making history, we must strive to make a difference," Barnes said.

"I am calling for a red-flag law that will allow law enforcement or family members to go to judge and ensure that somebody who is a threat to themselves or others is temporarily disarmed," Kaul says.

Kaul also wants a law to prevent a backlog of untested rape kits.

Prior to the inauguration Walker tweeted, "Tonette and I love Wisconsin so we wish @GovEvers and the members of the State Legislature well! Congratulations!"

Evers will have to hit the ground running. The state's two-year budget is due in February. The budget will likely reflect a number of issues Evers campaigned on, including increased transportation spending and more money for education.

"But we are going to be spending a lot of time reaching out to the people of Wisconsin just like we did before the budget, and during the transition, making sure people understand what our priorities are," Evers said during a recent stop in Appleton. "And we want to have people across the state actively involved in the discussions about this next budget."

Evers will preside over a divided legislature. The executive branch is led by Democrats. The State Assembly and State Senate are controlled by a Republican majority.

"We're going to be talking about civility, finding common ground. Making sure that we respect people's differences," Evers says. "The things that the people of Wisconsin have told us both during the campaign. Yes, they care about issues. They care more, frankly, about making sure that we are civil to each other and turn down the rhetoric going forward."

State Senate President Roger Roth (R-Appleton) says Republicans are not ready to overturn the agenda they passed while Walker was in office.

"I think it would mean a lot if he would come forth and recognize some of the many reforms that we've done over the last eight years. If he could let Republicans know that his goal isn't on day one just to overturn all of these reforms but to try and find commonality in moving forward, I think that would be a positive thing for him to do," Roth says.

Roth also stated the importance of finding bipartisan agreement. The legislature and Walker moved to weaken some powers of the executive branch that Walker enjoyed during his time in office.

"I'm really looking forward to working with Governor-elect Evers and legislators on both sides of the aisle to see what kind of commonality we can bring," Roth said. "We have divided government now in Madison. So it's incumbent upon us and these legislators to work together and find areas of agreement."

Tonette and I love Wisconsin so we wish @GovEvers and the members of the State Legislature well! Congratulations!

Barnes says “We must strive to make a difference.” Thanks parents who are in the audience. pic.twitter.com/6LdTUIsaxM

Evers says the state must fully fund public schools at every level—- and heath care must protect people with pre-existing conditions. pic.twitter.com/gnNUHN63bt

Gov. Tony Evers has signed an executive order requiring state agencies to develop and implement policies preventing discrimination against people based on their sexual orientation and gender identity.

The move Monday on his first day in office was praised by Fair Wisconsin director Megin McDonell who said it "modernizes our state's internal policies to make sure Wisconsin government employees are judged solely on their job performance, not who they are or who they love."
The Evers administration will also create a model anti-discrimination policy.
Evers is also calling for the state to put standard terms in contracts saying that the recipient can only hire on the basis of merit and they can't discriminate.
Another order Evers signed calls for state agency leaders to "recognize the valuable contributions of state employees, promote positive morale and foster a collaborative work environment."
___
Assembly Speaker Robin Vos is using his first speech of the new legislative session to emphasize lawmakers are the most important branch of government.
Republicans control both the Assembly and the Senate but look destined to lock horns with new Democratic Gov. Tony Evers heading into the session.
Vos told the Assembly following inaugurations Monday that the Wisconsin Constitution lists the Legislature first among the three branches of government.
He says some may want the Legislature to "veer into the left lane" since Evers is now the governor but Republicans won't let government expand at the expense of the people's freedoms. He told his fellow Republicans that compromise doesn't mean compromising your ideals.
He also told Democrats to end their "excessive outrage."
___
Wisconsin Senate Majority Leader Scott Fitzgerald says he's warning fellow Republicans to think twice before bringing forward bills Democratic Gov. Tony Evers is certain to oppose.
Fitzgerald told reporters Monday that includes measures focused on restricting abortions and "some Second Amendment stuff."
Fitzgerald says he doesn't agree with Evers on the need to increase the minimum wage
Fitzgerald says he's warning Republicans who have never lived under divided government to be prepared for the process slowing down as they calculate which issues can win approval from Evers.
Still, Fitzgerald called for bipartisanship during a Senate floor speech following inauguration. He says, "let us be united by our shared vision to make Wisconsin a better place to live, work and raise a family."
- Associated Press wire reports
Related Stories
We welcome comments and civil discussions. powered by Disqus