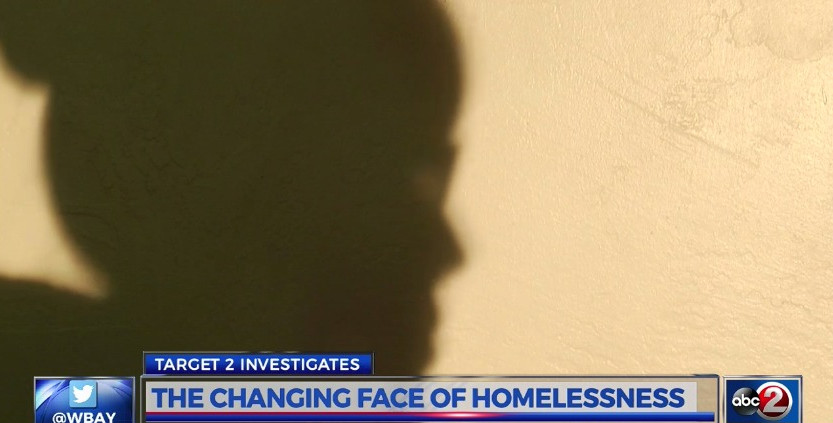 Target 2: The changing face of homelessness

BROWN COUNTY, Wis. (WBAY) - Hotels and emergency shelters. Cars and abandoned buildings. These places are where hundreds of moms, dads, and kids are sleeping in Northeast Wisconsin.

In 2016, 1,300 kids in Brown County were considered homeless at some point during the school year. It's one of the staggering numbers Target 2 Investigates found as we started to dig into the changing face of homelessness.

"I don't want people to think I'm a bad parent because this is the home that I'm giving them for the time being, but I don't want them to feel sorry for me," says "Marie", a homeless mom who spoke with Target 2 Investigates.

Currently, more than 200 families are either homeless or at risk in Northeast Wisconsin. There is nowhere near enough shelters to house all of them.

These cases defy the stereotype some people have of homelessness, the image of people who don't work or perhaps have substance abuse problems.

One social worker told Target 2 Investigates she recently helped a family who became homeless because they had to choose between paying rent or paying for their child's funeral.

Roxanne is a mother who overcame homelessness. "It was a car, staying with people, family," she says.

"Marie", her three children, and her boyfriend have called a 326-square foot hotel room home since February. She asked Target 2 not to use her real name.

Every paycheck from her boyfriend's 60-hour-a-week job pays for hotel and food. There's nothing leftover to save.

"Struggling to do homework, baby cries and they're sleeping and it wakes them up, and there's just no quiet," Marie says as she describes her life in the hotel.

Marie considers herself lucky, because her family is not out in the cold.

Roxanne was. She's in an apartment now, but one year ago, she lived out of her car with her three girls.

"It's really hard. It was hard for me to find places to park my car." Roxanne says. "Remember me and my girls would sit at the park during the day, waiting for ... waiting for nothing basically."

Roxanne says it was almost overnight when she became homeless.

"I was at a home for five-and-a-half years and the landlord decided to sell and the new owners wanted to move into my home, so I had to look for somewhere else," Roxanne says.

Roxanne found another place. Then her car broke down. She paid to fix it, and got a housing voucher to cover the gap.

However, her new landlord would not accept the voucher.

"The landlord that I was with gave me the five-day eviction," Roxanne says.

Both mothers have faced the same struggles.

"A lot of landlords or property owners, they don't want to accept housing," Marie says.

We heard a similar story from several people. However, landlords don't have to accept housing assistance.

TARGET 2 INVESTIGATES: "That's not a discrimination?"

GREEN BAY HOUSING ADMINISTRATOR: "No, that's not considered discrimination. That's not a protected class to be receiving a Section 8 voucher."

Green Bay Housing Administrator Robyn Hallet says some landlords won't rent to people based on a criminal record or a history of police calls and nuisance complaints.

Like Roxanne, these potential renters could have a recent eviction on their record.

Some people have poor credit or low income.

"Some landlords may ask that the applicant has a certain level of income, maybe two or three times what the rent is, as their income, and that is permissible," Hallet tells Target 2.

Roxanne tells us, "They look at your criminal background, and I can understand that, but two-and-a-half times? I understand it's a business, but it's really hard for people to make that much."

Even if people can find a landlord who takes vouchers, it takes about a year to get one. As of this publication, about 400 people are on a wait list.

"Two-hundred have designated themselves as homeless, and we're not pulling any of those homeless off right now," says Matt Roberts, Integrated Community Solutions executive director. "The issue is funding."

Vouchers are federally funded, but it could be months before that money arrives.

"It's extremely frustrating, especially at this time of year," Roberts says.

Some families turn to shelters, but the help isn't always readily available.

Green Bay's Freedom House can take 12 families. It's currently full with 40 more on the wait list.

House of Hope, an emergency shelter for young, single moms, is full at 13. Nearly 20 more are on the wait list.

Green Bay's Golden House is for domestic violence victims and their children. It's at capacity.

"We don't have enough capacity to be able to help families who are right now, today, literally homeless," says Karen Michaels of Golden House.

Roxanne hopes to shed light on the changing face of homelessness.

"I think a lot of people need to open their eyes a little bit more to see how it is," Roxanne says.

There are more than 800 landlords in Brown County accepting housing vouchers. There are efforts to attract more landlords to do likewise.

On Thursday, Target 2 Investigates will highlight that effort and report on the startling number of people who are on the brink of homelessness.