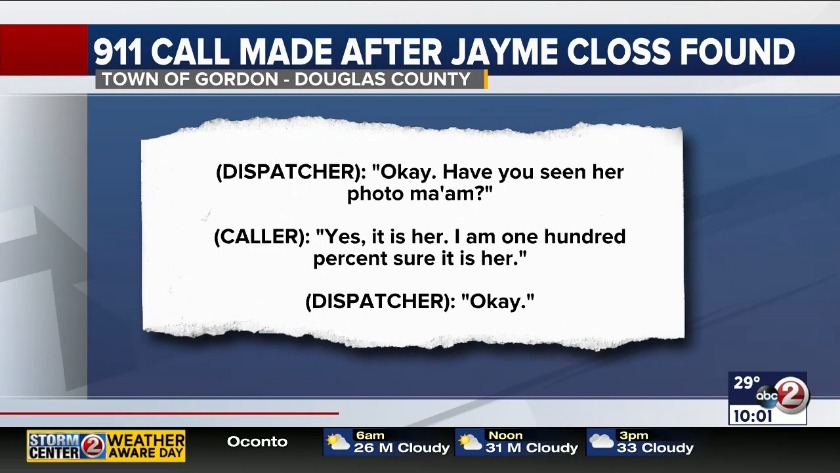 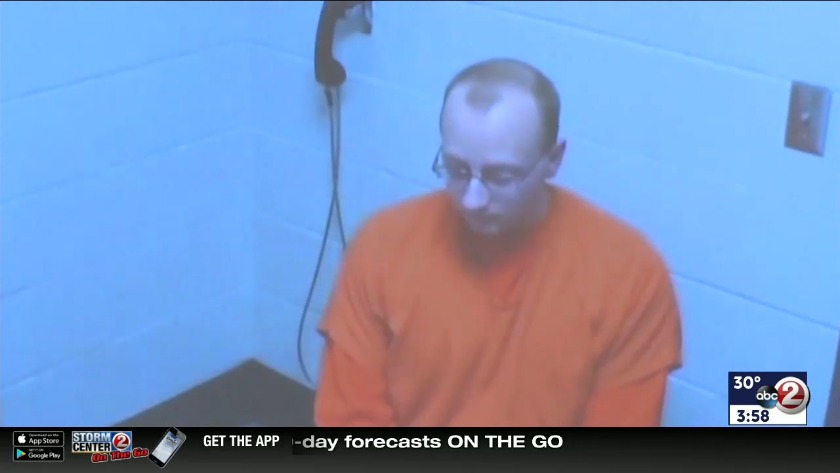 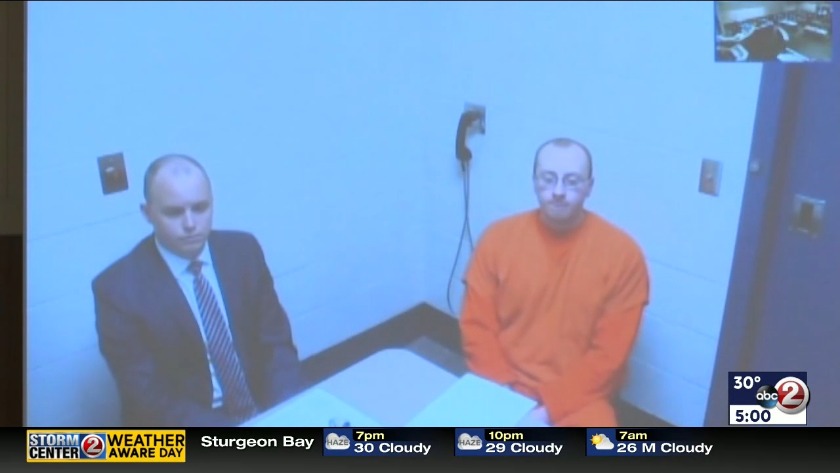 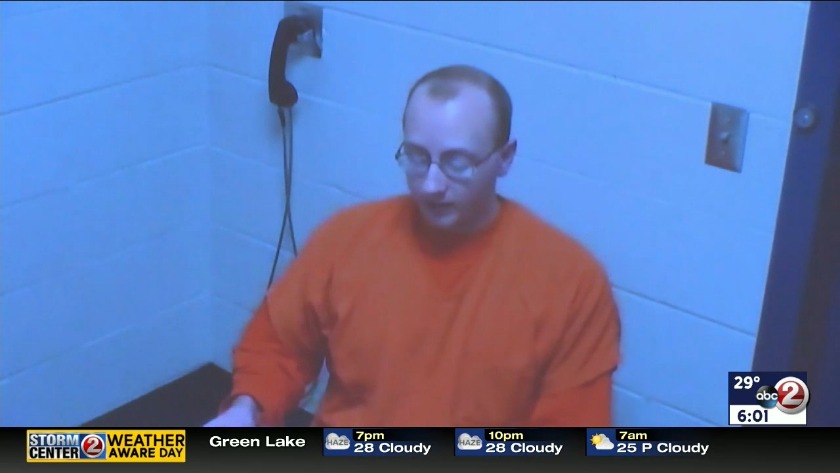 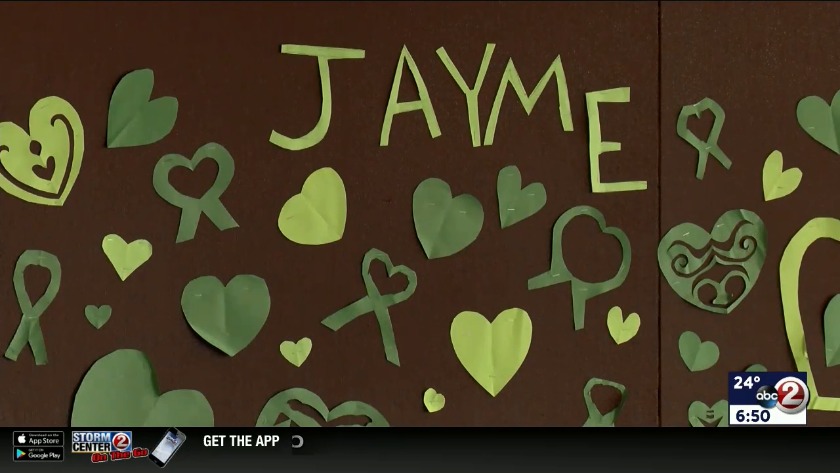 BARRON COUNTY, Wis. (WBAY) - Barron teen Jayme Closs heard her father get shot and then witnessed the shooting of her mother before she was abducted by Jake Patterson, according to a criminal complaint obtained by Action 2 News.

Patterson told investigators that he did not know Jayme before the events of Oct. 15, but he had seen her get on the school bus and "knew that she was the girl he was going to take." He didn't even know her name until after he kidnapped her.

The court set Patterson's bond at $5 million Monday afternoon. The district attorney argued for a high bond amount citing the seriousness of the crimes, that Patterson faces life in prison, went to great lengths to conceal his identity during and after the kidnapping, and said he was willing to shoot at officers if he was stopped.

Patterson seemed fidgety but showed no emotions during the court proceeding. He only spoke to confirm his name and address and say he understood the charges against him and waived his right to a speedy preliminary hearing.

The courtroom was packed with Jayme's relatives, Patterson's father and brother, along with media from Wisconsin, Minnesota and national outlets. Barron County District Attorney Brian Wright told reporters, "There is more information that, as we proceed, will be made available whether it's through court proceedings and motions that we have, or through a trial itself. So at this point I'm going to rely on the complaint, limit my remarks at that. I think it gives a pretty good explanation for what occurred and why we filed the charges that we did."

According to a criminal complaint obtained by Action 2 News, Jayme told investigators that on the night of Oct. 15, she was asleep in her bedroom when her dog started barking. She got up to see what happened and saw someone driving up in the driveway.

She woke up her parents, James and Denise, and her father went to the door. Patterson said he could see James Closs peeking out a window next to the front door. When he asked Patterson to show a badge, Patterson shot him with a 12-gauge shotgun and entered the home. Jayme told investigators that she heard a gunshot and knew her father had been killed.

Denise and Jayme went to a bathroom and hid in the tub. Denise Closs had her cell phone and called 911. Patterson broke down the bathroom door and found Denise and Jayme holding each other. He told her mother to hang up the phone.

Patterson instructed Denise Closs to put duct tape over Jayme's mouth. when Jayme was bound, Patterson shot Denise in front of her daughter.

James and Denise Closs were both shot in the head.

Jayme says this was the first time she ever saw Jake Patterson. He dragged her to his car and put her in the trunk of his car.

Jayme says Patterson took her to a house and told her to take off her clothes because he didn't want there to be evidence.

Jayme said that Patterson would have friends and relatives over to his home during her captivity. He made it clear that no one could find out that she was there "or bad things would happen to her."

Patterson made Jayme hide under his bed when people were over. He would also make her hide under the bed when he was away.

She was forced to stay under the bed for 12 hours at a time with no food, water or bathroom breaks.

In one instance, Patterson got mad at her and hit her on the back with a handle. He threatened worse punishment next time. She didn't know what she had done to make him mad.

On Jan. 10, Patterson left the house and told Jayme he would be gone for five or six hours. He made her get under the bed.

"Jayme deserves enormous credit," the district attorney said. "As a 13-year-old, and she has such bravery to have done what she has done, but there were many many other as well that it all those pieces fell into place and that afternoon the outcome could have been different."

Jayme was able to push the weighted bins and boxes he used to block her under the bed, put on a pair of his shoes, and walked out of the house in Gordon, which is about an hour north of Barron. That's when she was able to track down a woman who was walking a dog. The woman took Jayme to a nearby house where neighbors called 911.

"She was skinnier than in her photograph but I think healthy overall, and she was able to have a conversation with us. I think she was doing OK and-- despite the circumstances," the neighbor, Kristin Kasinskas, said. "She said that this person usually hides her or or hides her when others are near or when he has to leave the household."

Jayme was able to describe the vehicle of her alleged abductor. Patterson was stopped and arrested a short time later.

"I did it," Patterson told the deputies who stopped him.

Investigators interviewed Patterson. He said he saw Jayme get on the school bus on Highway 8 during his drive to work. He said he had no idea who she was, but "he knew that was the girl he was going to take."

Patterson said he drove to the Closs home twice with the intent to kidnap Jayme prior to Oct. 15 but didn't go through with it.

On Oct. 15, he went to the home with the shotgun. He wore gloves so there would be no fingerprints or DNA.

He shaved his face and head and showered before leaving his house. He shut off his headlights and coasted into the driveway.

"The defendant stated he was determined he was going to take [Jayme] that night and was going to kill anyone in the house because he could not leave any eyewitness behind," reads the criminal complaint.

"I assure you, while you won't receive public statements, prosecutors will be working hard to convict the defendant of the charges filed against him," District Attorney Wright said. "We are so grateful for Jayme and her safe return, and now it's time for us to obtain justice for her and her family."

Patterson's attorneys held a news conference Sunday after speaking with their client.

"Mr. Patterson's feelings are consistent with what you would believe of someone involved with these allegations. He's in a single cell in a Barron Co. Jail, and his feelings are appropriate for those times and circumstances," said attorney Charles Glynn.

DailyMail.com published photos they say show the home where Jayme was held.

Investigators are not looking for additional suspects.

We're told more charges could be filed against Patterson in Douglas County, where he held Jayme for almost 90 days. That decision will most likely be made before his next appearance in Barron County court, which is scheduled for February 6.

Patterson has no criminal history in Wisconsin. Neighbors and Gordon residents don't know much about the 21-year-old suspect.

"The way that the house is kind of angled, from the road, there's no way you can even see. There's no windows facing that side of the road. The windows are facing more the opposite side. So, you can't tell if there's lights on," neighbor Adam Wilson said.

Friends from high school are struggling to understand Patterson's motivations.

"You know you talk to this person every day. You don't know that three years from now you're gonna hear about this," says Dylan Fisher. "So yeah, I'm asking myself a lot of questions and none of this makes sense."

Jayme Closs was evaluated at a hospital and given medical clearance on Friday. She spent the weekend with her aunt, Jennifer Smith.

Smith posted photos to social media of Jayme smiling with her dog and her aunt.

"Jayme's dog was there. He crawled right up on her lap and snuggled up to her," Allard told GMA.

Now comes helping Jayme deal with the loss of her parents.

"My biggest concern was that she was real close to her mother," Allard told Good Morning America. "Her mother was really good to her. Her dad was too."

On Saturday, Jennifer Smith posted this message to Facebook:

"Jayme had a pretty good night sleep it was great to know she was next to me all night what a great feeling to have her home. As a family we will get through all of the healing process Jayme has. It will be a long road but we are family strong and we love this little girl so much!! We will do anything and everything!! My beloved sister Denise pooh and brother in law Jim can rest at peace and I keep assuring them Jayme is safe and we will make sure forever. We all miss them both dearly now they know there Jayme which was there whole world is home with family!! God is Good !! Bless you all!!"

"I have absolutely no way of knowing how to thank soooo many people. I would Love to give each and everyone of you a huge hug...together we brought Jayme home. She did this. I am so very proud of you Jayme Closs. You saved your strength at the utmost opportunity. I believe all the thoughts and prayer behind you, God and your mom and dad led you to use your strength, love, and power to get you home to us. I am so thankful for that. This is a day of happiness I will never forget... getting to hug you and tell you that I LOVE YOU. you will now be surrounded by love and we will Always be there for you. God is good. Keep praying for our dear girl as we will travel this road together to help heal what has been lost. My sister Denisey-Pooh and Jim. .. we have your baby girl in our arms and may you both now Rest In Peace, we will never forget you. Just so glad we bot your baby girl back. Love you both and miss you terribly."

“It’s so easy to feel that ‘this is going to define me for the rest of my life’ … but it doesn’t have to be that.” Elizabeth Smart offers advice for Wisconsin teen Jayme Closs. https://t.co/Krbe9TCXEU pic.twitter.com/9h4SUkQf7W

A Wisconsin man suspected of abducting 13-year-old Jayme Closs washed out of the U.S. Marine Corps after little more than a month.

Jake Thomas Patterson wrote in his high school yearbook that he planned to join the Marines after graduation. But military records show he lasted for only about five weeks before being prematurely discharged in October 2015 at the rank of private.
Marine spokeswoman Yvonne Carlock said by email that Patterson's early discharge indicated "the character of his service was incongruent with Marine Corps' expectations and standards."
- Associated Press
Related Documents
Related Stories
We welcome comments and civil discussions. powered by Disqus