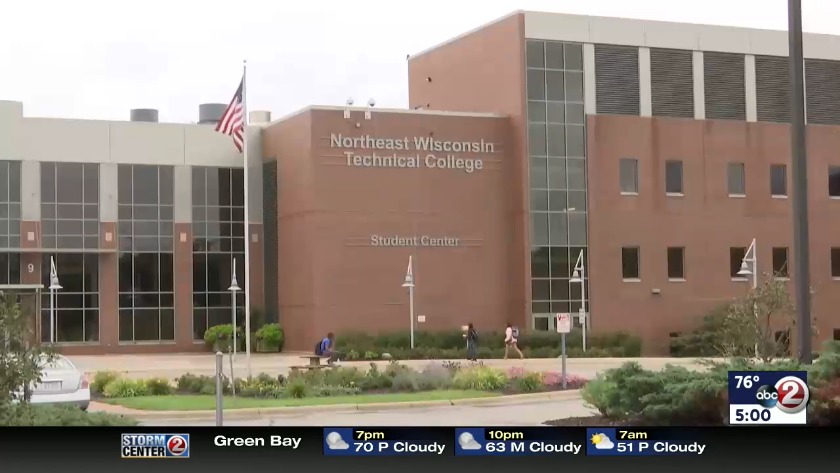 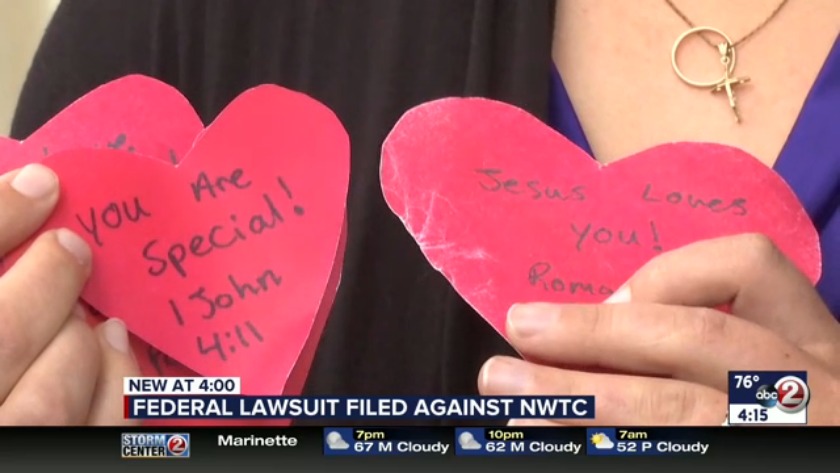 GREEN BAY, Wis. (WBAY) - The Wisconsin Institute for Law and Liberty has filed a federal lawsuit against Northeast Wisconsin Technical College over what it calls a violation of a student's First Amendment rights.

WILL, a non-profit law firm based in Milwaukee, filed the lawsuit in Green Bay Wednesday. It stems from an incident on campus on Valentine's Day.

"This is a case about whether a public university can put free speech in a box," said Rick Esenberg, Wisconsin Institute for Law and Liberty.

A student named Polly Olsen was handing out valentines to students and staff on campus and was stopped by campus security.

"When she attempted to do this, security forces were dispatched to apprehend her and tell her that she was speaking outside of the approved area, an area which she could only speak in if she got advanced permission," Esenberg says.

The valentines included messages and referenced Bible verses. One valentine said "You are special! 1 John 4:11"; another said "Jesus Loves You!"

WILL says NWTC's actions are unconstitutional.

Olsen says she's been handing out valentines on campus for several years, motivated by showing kindness to strangers. She said she's been told in the past that the public assembly policy would change.

This year, Olsen decided it was time to take the matter into her own hands and file a lawsuit.

"Because everyone needs freedom, and if we don't have freedom of speech then truth can't prevail, and lies can run rampant," Olsen says. "And so it's a very important thing for our country to strengthen us, and to really build a unity because if we can't express our opinions then those underlying emotions can build."

Olsen continued, "I love my school and I hate to do this, but I love my freedom and my country, and God more."

NWTC Vice President of Advancement, Karen Smits, says the school's policy on public assembly is under review, and Olsen has been invited to take part in that review.

"We get our students input very often when we are looking at policies, when we are looking at practices around the college, when we want to know their opinion about something," Smits says. "So in this case we are going to invite a small group of students to review the policy, and let us know what they think, if it would meet their needs, if they would have a reason to want to have a public assembly."

"Northeast Wisconsin Technical College (NWTC) is committed to the free exchange of ideas and to maintaining a welcoming and safe environment that promotes student success.

Because we respect student confidentiality, we do not comment on student conduct. We take student concerns about free speech seriously and we take our legal responsibility to protect student records seriously as well. Free speech is exercised every day in many different contexts all over the NWTC campus. The policy deals with “public assembly” as the law recognizes that, unlike a public park, not all physical areas of educational institutions are open for public assembly.

The policy in question has been under review since October 2017 and is in the final stages of revision and approval. The student referred to in the lawsuit was invited to participate in the review to provide a student perspective. College’s current Assembly Policy can be found here: https://www.nwtc.edu/NWTC/media/About-Us/Public-Assembly-Policy.pdf"

Meanwhile, Esenberg and Olsen say this case isn't about damages or money.

"We're hoping to get out of the lawsuit is a change in the policy. This isn't the really a case about money, this is a case about principle, it's about standing up for the right of college students to express themselves and to stand up for the First Amendment and the ways in which it applies at a public university such as NWTC," Esenberg says.

Polly Olsen has filed a federal lawsuit against Northeast Wisconsin Technical College. She says the school violated her freedom of speech. NWTC says it takes freedom of speech and the 1st Amendment seriously. @WBAY pic.twitter.com/X9IaQNmvBH