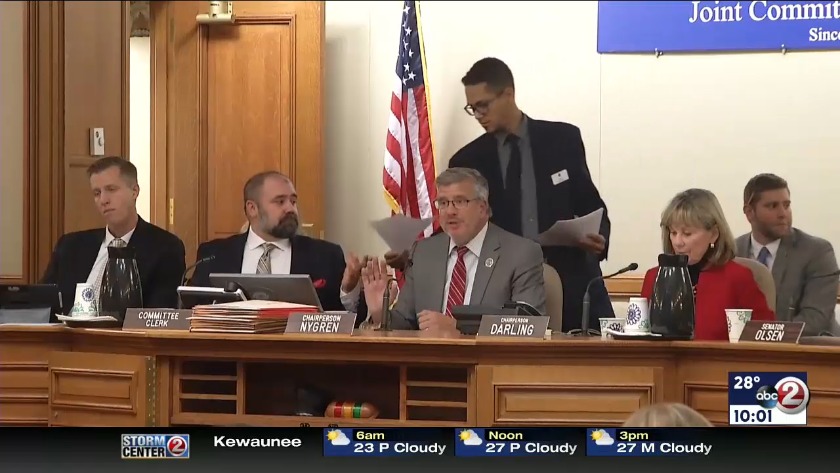 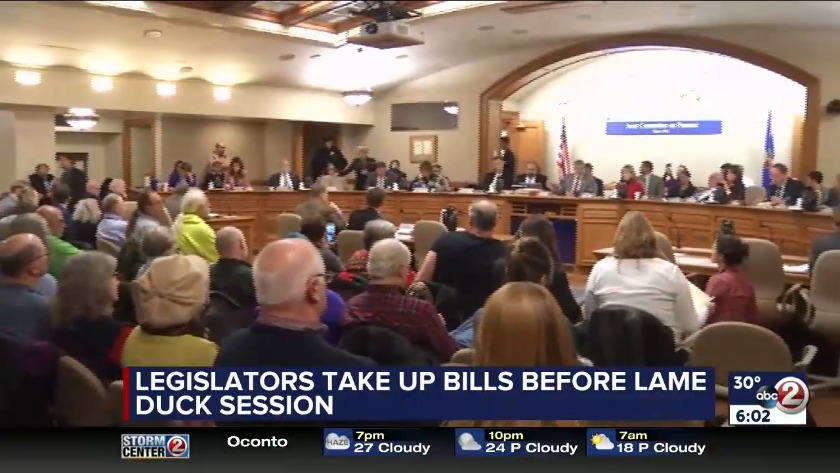 Sweeping proposals to weaken the incoming governor and attorney general in Wisconsin have been advanced to the full Legislature for approval.

But the Republican-controlled committee around midnight Monday night did not advance a bill to change the date of the 2020 presidential primary, a move that would cost millions and drew widespread opposition from election officials.

That means that measure is all but dead.

The other proposals give outgoing Republican Gov. Scott Walker a final chance to reshape Wisconsin law before he leaves office next month.

Opponents cast them as a last-gasp power grab and attempt to invalidate the November election.

Committee approval sets up dramatic votes on the other measures Tuesday in the Senate and Assembly.

Other changes would limit early voting to two weeks and allow the Legislature to replace the attorney general when defending state laws.

A public hearing continues at this hour at the state Capitol as legislators plan a number of bills to take up in a lame duck session for Gov. Scott Walker to sign before he leaves office.

This is shaping up to be a huge fight here at the Capitol as Republicans propose these bills for divided government, as they will continue to control the state legislature in January with Democrats having a firm hold on the executive branch.

"I'm concerned," Senate Majority Leader Scott Fitzgerald said. "I think governor-elect Evers is going to bring a liberal agenda to Wisconsin. There is going to be a divide between the legislative branch and the executive branch. But once again, the process has to work, and I think this is part of that process."

The room was at capacity Monday for the public hearing of the Joint Finance Committee and some people were not able to get inside. That angered a number of protesters who showed up, accusing Republicans of refusing to accept the results of last month's election.

"For the first time in state history, we're talking about taking away power. And the will of the people which was for change and for balance, the governor should be able to proceed and the attorney general should be able to proceed, and our treasurer and our secretary of state. So what we're doing here is absolutely wrong. It's politics at its worst," Sen. Dave Hansen (D-Green Bay) said.

Monday a few people were kicked out by police for disruptions in the audience.

The room erupted in loud booing and jeers when Rep. John Nygren said the protesters could "get respect if they show respect" and when he told them "The current body -- the Legislature and the governor -- has a responsibility to do their job and the power to do their job until that session ends, so if we could stop about the 'unprecedented,' because we know that's not true. If we can stop about the 'attack on democracy,' because that's not true --"

Governor-elect Tony Evers told us in an interview apart from the meeting, "November 6 we had a change. People in Wisconsin voted for change and voted for me for governor and voted for Josh Kaul for attorney general, and I believe this is their (Republicans') opportunity to turn back the clock and nullify the impact of the vote."

Descriptions of the bills were read publicly at the Joint Finance Committee meeting, where many lawmakers asked questions about the details.

Other bills being considered would limit early voting to two weeks; give the Legislature more control over the Wisconsin Economic Development Corporation created by Gov. Scott Walker; and let lawmakers replace the attorney general with private attorneys at the taxpayers' expense.

Another would move the state's 2020 presidential primary from April to March, which Fitzgerald acknowledged is to help a conservative Supreme Court justice who is up for re-election. The move was opposed unanimously Monday by Wisconsin's county clerks, who would be tasked with three elections in six weeks.

Assembly Speaker Robin Vos said, "We want to make sure the new administration doesn't work around the Legislature and rule from the east wing. We want both brances to have an equal seat at the table, and we believe in the end this will allow a better exchange and more cooperation."

Sen. Jon Erpenbach (D-Middleton) countered, "What Republicans, and especially the authors of this legislation, are going to say about this today, that this is a restoration and balance of good government, is a lie. It's a power grab. They lost, and they're throwing a fit."

The stage is set for a vote on these bills as soon as Tuesday -- and we were told to expect it to be a very long day.

Wisconsin Republican Senate Majority Leader Scott Fitzgerald says there aren't enough votes in the Senate to approve every proposal being offered in the lame-duck legislative session, but he wouldn't say that any of them are dead.

Fitzgerald and Republican leaders told reporters Monday before a public hearing that several of the ideas, including moving the 2020 presidential primary, remain a work in progress.

Most of the state's county election clerks are opposed to the primary date change, citing the $7 million cost and logistical difficulties.

But Fitzgerald says he's not willing to say whether there are enough votes to do it.

Hundreds of people protested both inside and outside the hearing room, banging on the doors and chanting "Respect our votes!"

The Wisconsin Elections Commission is warning state lawmakers that moving the state's 2020 presidential primary would be "extraordinarily difficult."

A sweeping package of GOP lame-duck legislation up for votes Tuesday includes a plan to move the primary from April to March. The move is designed to ensure that conservative state Supreme Court Justice Dan Kelly doesn't face a Democratic wave when he comes up for re-election in April. State elections workers would have to run three elections in three months.

Commission staff handed the panel a memo Monday concluding the switch could cost at least $7 million and create a logistical nightmare for local clerks.

The commission unanimously adopted a motion Monday to send written testimony to legislators saying the move would create multiple conflicts, be "extraordinarily difficult" and may not be feasible. The testimony goes on to state the commission is concerned about costs and complains that the legislation provides no additional funding.

Wisconsin Democratic lawmakers say a Republican lame-duck session is an unprecedented attempt to take away powers of the incoming governor and attorney general.

Members of the Legislature's budget committee spoke to reporters Monday ahead of a public hearing on the package of proposals. The bills give outgoing Republican Gov. Scott Walker one last chance to enact laws before he's replaced by Democratic Gov.-elect Tony Evers.

Democratic state Sen. Jon Erpenbach calls the lame-duck session a "power grab." He says Republicans are upset they lost every statewide race in November. Erpenbach says, "They lost and they're throwing a fit."

The Republican-controlled budget committee planned to vote on the bills after a hearing Monday, setting up votes in the state Senate and Assembly as soon as Tuesday.

Wisconsin Democrats are warning that a Republican bill to limit early voting is designed to suppress turnout by Democratic voters and contradicts a court ruling that already struck down the idea.

One Wisconsin Executive Director Scot Ross said Monday the Republican measure shows the GOP "refuse to accept the results of the 2018 elections" after losing six statewide races, including the contest for governor.

One Wisconsin successfully sued to strike down a previous Republican effort to limit early voting. Ross says Republicans believe they lost last month "because too many people voted."

About 565,000 people voted early in the November elections.

The bill is one of several Republicans plan to take up during a lame-duck session starting Monday. Others include limiting the power of incoming Democratic Gov. Tony Evers.

A Democratic member of the Wisconsin Elections Commission is calling a Republican plan to move the presidential primary a huge waste of money.

The GOP has introduced sweeping lame-duck legislation that would weaken the governor and attorney general's offices. The bills also would shift the 2020 presidential primary from April to March to protect conservative Supreme Court Justice Dan Kelly from a potential Democratic wave in April.

The move would create three elections in three months. Clerks say it's logistically impossible and would cost at least $7 million.

The Elections Commission discussed the measure Monday. Commissioner Mark Thomsen, a Democratic appointee, called the idea the "biggest waste of money for a single person that I can think of."

Wisconsin Republicans are forging ahead with a rare lame-duck session giving outgoing Republican Gov. Scott Walker a chance to limit the powers of his incoming Democratic successor.

Other bills would move the 2020 presidential primary date to benefit a conservative state Supreme Court justice, limit early voting and reduce the power of the incoming Democratic attorney general.

A Republican-controlled legislative committee planned a public hearing Monday, immediately followed by a vote, setting up approval in the state Senate and Assembly on Tuesday.

Democratic Gov.-elect Tony Evers is decrying the lame-duck session, calling it an attempt to invalidate the results of November's election.

He is vowing to fight it, saying lawsuits are being explored, and called on the people of Wisconsin to contact their legislators even as the bills were speeding through.

(Copyright 2018 The Associated Press. All rights reserved. This material may not be published, broadcast, rewritten or redistributed.)

Police have removed a number of people from the JF Committee hearing for attempting to disrupt it— as lawmakers explain what the bills would do. pic.twitter.com/W7VnKZbIoO