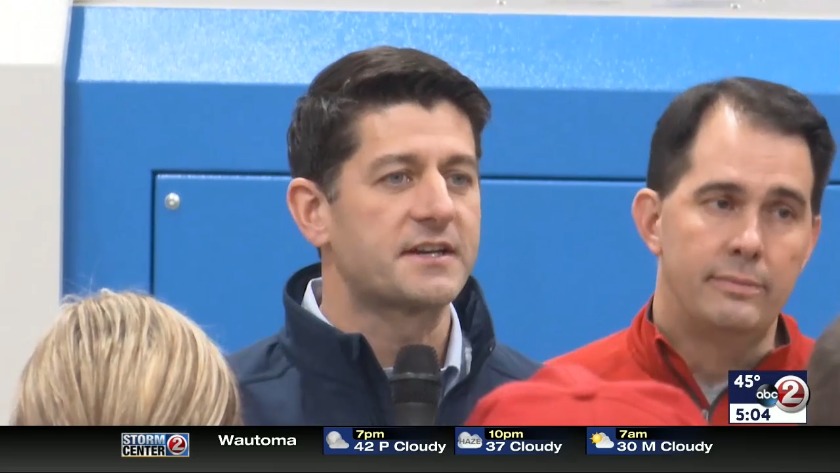 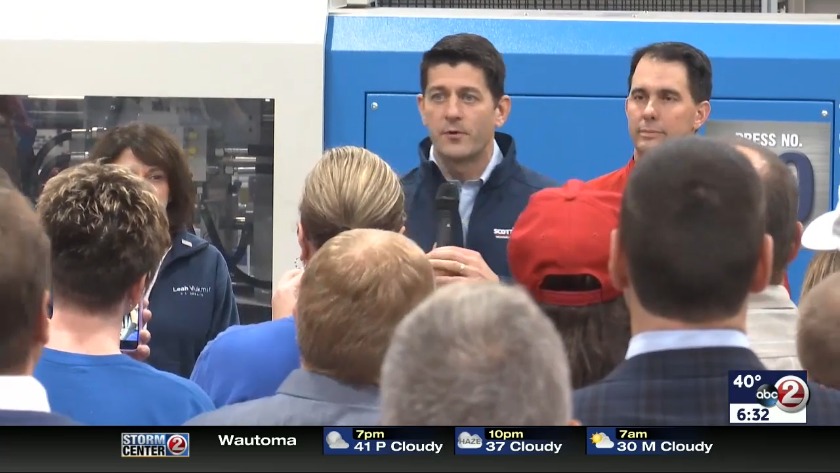 Speaker Paul Ryan (R) is taking some time away from Capitol Hill to campaign for Republican candidates.

On Thursday afternoon, supporters of Gov. Scott Walker (R) waved signs as they listened to his final call for votes just days before the midterm election.

"I'm encouraging people to get out and tell friends, family, neighbors, and others about what's at stake in this election," said Governor Walker.

Gov. Walker stopped at the Kaysun plastic manufacturing plant in Manitowoc where he highlighted his proven track record with creating jobs.

"There are more people working right now than ever before," he said. "We've got eight months in a row of record unemployment, and we're going to keep growing off of that."

He knows it is going to be a tight race to the finish line against opponent Tony Evers (D). Even though the latest poll results show the two candidates in a dead heat, Walker says the poll also showed an overwhelming margin of people who believe the state is heading in the right direction.

"We just have to connect the dots and tell people that didn't happen by accident," said Walker. "If you want that continue with more jobs, more opportunity, and higher wages in the state, then I need their vote."

Although Speaker Ryan is leaving Congress after this year, he is using what is left of his time in office to show support for Republican candidates in his home state.

"Scott Walker and Leah Vukmir kept their promises, and as a result, Wisconsin is leading the nation in all of these critical areas," he said. "Wisconsin's economy is humming. Our budget is sound. We're doing extremely well. We have men and women here who made a promise, kept their promise, and it's working as a result of it."

Walker's opponent, State Superintendent Tony Evers, kicked off a two-day statewide "Tour of Change" Thursday in the western part of the state, including visits to Tomah and Eau Claire.

Evers fought back against attack ads against him that say he plans on raising the gas tax a dollar, which he called "ridiculous." He reitered his plan to lower income taxes for 86 percent of the people in Wisconsin.

He said the issues he's fighting for are not partisan issues. "It's all about what people care about, whether it's our roads, education system, health care. Those are not owned by Republicans or Democrats. It's owned by the people of Wisconsin. I look forward to uniting this state that hasn't been for 8 years," Evers said.

WAUKESHA, Wis. (AP) - Gov. Scott Walker is saying for the first time that he wants to enact the "exact same language" that's in federal Affordable Care Act at the state level guaranteeing insurance for people with pre-existing conditions.

Walker wants to repeal the federal law and authorized Wisconsin's participation in a federal lawsuit seeking to strike it down.

But he told reporters on Thursday in Waukesha that he now wants to enact the same federal protection in Wisconsin.

Walker has previously supported a bill passed by the state Assembly, but stalled in the Senate, that guaranteed coverage but was not as expansive as what is currently guaranteed under the Affordable Care Act.

Democratic challenger Tony Evers issued a statement saying "Actions speak louder than words." "The fact is that Scott Walker spent the past eight years trying to repeal the Affordable Care Act with its protections for pre-existing conditions."