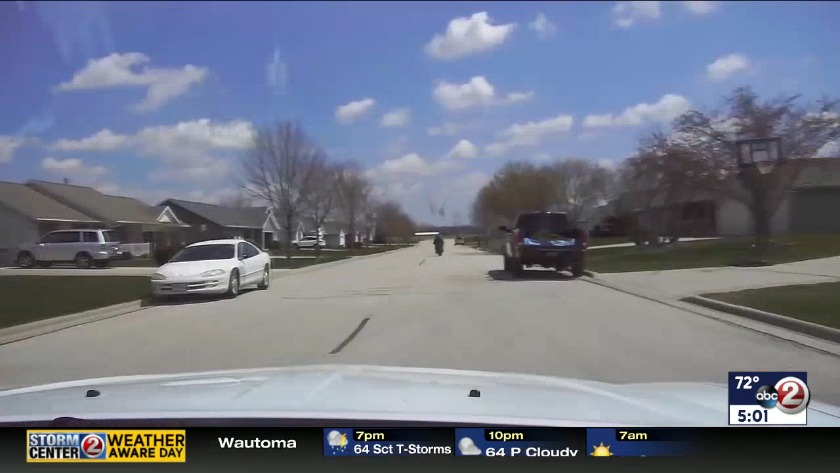 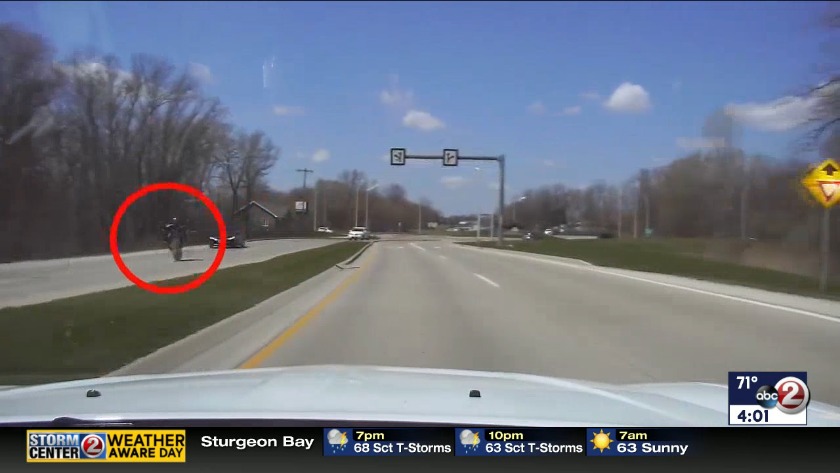 The Brown County Sheriff's Office and Green Bay Police say they've received numerous complaints about motorcycles traveling in excess of 100 miles an hour and riding recklessly. One of the problem areas is Nicolet Drive. The scenic stretch curves and winds along the bay for several miles.

The Sheriff's Office says this isn't an issue with motorcyclists in general. They say 90 percent of drivers follow the law.

It's the "bad apples" that have prompted the Sheriff's Office to implement a zero tolerance policy in hopes it will prevent injuries or deaths.

The chase captured on dash cam video happened on Main Street in Bellevue. The biker pops a wheelie. A Brown County deputy follows the biker, but is unable to safely pursue him in high traffic.

"Cars actually were pulling over to avoid colliding with that motorcycle as it went flying by him, doing a wheelie," says Capt. Dan Sandberg, Brown County Sheriff's Office.

The deputy later spots the biker in a residential neighborhood.

"He's almost going to hit a car, too, that's parked, trying to swerve around it," Sandberg says as he watches the dash cam video.

"When they're driving like that and crash, they crash at extremely high speeds and they're striking other vehicles and endangering other lives."

The 22-year-old rider takes off into a field. His bike gets stuck and he runs away. The suspect was eventually arrested for drug possession, resisting, and fleeing an officer.

It's the biker's speed and reckless driving that is of highest concern to law enforcement.

The incident is part of an increasing pattern of reckless driving, according to Sandberg.

"We've been getting a lot of complaints where people are driving down Highway 41 and they have motorcycles popping wheelies on a 70-mile-an-hour highway and passing the cars on the highway," Sandberg says.

Some bikers are traveling those high speeds on Nicolet Drive. It's a residential area with speed limits of 35 mph.

"The reckless behavior is endangering everybody around them," Sandberg says.

Some homeowners spoke to Action 2 News. They've heard motorcycles speeding on the weekends, but they've adjusted to it.

One of the neighbors is a motorcyclist named LuAnn Davis.

"Occasionally, but not all the time," says Davis. "I sit in my backyard a lot and sometimes at night, I see them speed through, but during the day, usually not."

The Sheriff's Office has implemented a zero tolerance policy for these reckless riders. They're taking license plate numbers and issuing hefty fines. Some bikers face a possible suspended license.

"To endanger your own life because of some kind of behavior is one thing, but when you're doing a behavior that could impact other people in the community, that's where we really have a ... it's very frustrating for us," Sandberg says.

Nearly one-third of all Brown County fatal crashes since May 2017 have involved motorcycles. About 124 crashes involving motorcycles resulted in injuries.

He's not discouraging motorcycles, but he urges riders to think. He's treated bikers with serious injuries. Dr. Zemple has suffered his own injuries.

"There can be a time and a place to work on these maneuvers at high speeds or working on tricks, and that's not on any public road."