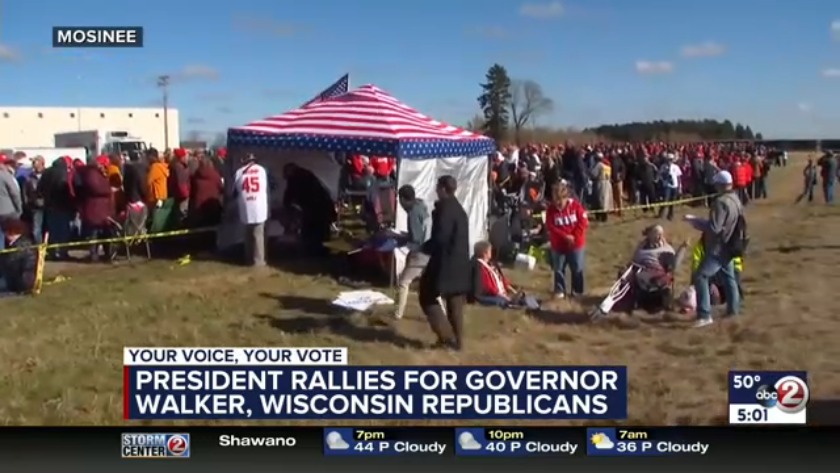 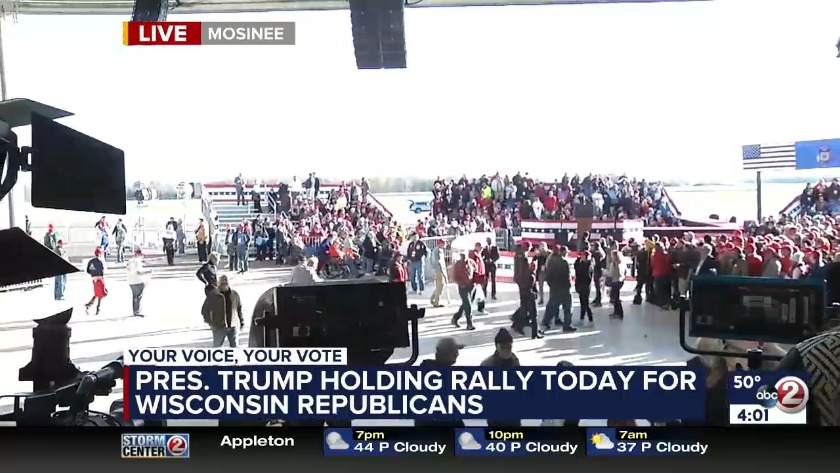 President Trump speaks at a campaign rally for Republicans at Central Wisconsin Airport in Mosinee on Oct. 24, 2018

The president spoke to a crowd outdoors at the Central Wisconsin Airport. Air Force One touched down shortly after 6:30 p.m.

He began by condemning the apparent attempted mail bombings targeting high-profile Democrats. "Any acts or threats of political violence are an attack on our democracy itself," he said. "No nation can succeed that tolerates violence or the threat of violence as a method of political intimidation, coercion or control. We all know that. Such conduct must be fiercely opposed and firmly prosecuted."

Eyes were on him to see if he would change his tone in the wake of the suspicious packages. Trump has frequently attacked political opponents -- calling Democrats "evil" and their supporters a "left-wing mob" -- and labeled the media "enemy of the people."

He said the condemnation of the threatening packages was bipartisan and promised less fiery rhetoric in his speech. "We want all sides to come together in peace and harmony," he said, then said the media must set a civil tone and "stop the negative and oftentimes false attacks and stories."

The president was in campaign mode, touting progress on the economy and a record number of jobs. "I always said it, I just didn't know I could do it this quickly," he said, smiling. He also touted lower poverty numbers for African-Americans and Hispanics, and the new Canadian trade agreement he said will benefit Wisconsin farmers.

Trump said he would usually be screaming the words but now he was holding back: "I'm trying to be nice," something he told the audience repeatedly during the speech.

"Do you see how nice I'm behaving today?" he asked. "We're all behaving very well. And hopefully we can keep it that way."

He criticized Democrats as a party on issues of health care and immigration.

"Wait until you see what we're doing with our border over the next few weeks," he said, which drew cheers from the crowd. "You're going to see a very secure border, just watch. The military is ready, they're all set," he continued, and the crowd broke into a chant of "USA."

During the roll call he greeted Gov. Walker on stage after the crowd chanted "four more years," and he said Walker is fighting for jobs and education.

Walker, dressed in a Green Bay Packers jacket, touted growth in manufacturing jobs and reductions in property taxes. He promised people with pre-existing conditions, like his wife, won't lose their health care. He said Trump's policies opened the door to bringing Foxconn to Wisconsin and increased trade opportunities with Canada. "He's making dairy great again in America, and it starts in Wisconsin," Walker cheered.

Wisconsin put Trump over the top in the 2016 election, and he won Marathon County with 57 percent of the vote. He found a friendly audience on Wednesday night.

Tom Schilleman of Green Bay told us why he was waiting to see the president.

From the stage, the president encouraged people to get out and vote, adding, "but if you're going to vote Democrat, don't bother."

The president will rally alongside Wisconsin Republican Gov. Scott Walker. Walker is seeking his third term leading the state. He's in a tight race with Democratic challenger Tony Evers. A recent Marquette University Law School shows Gov. Walker with a 47-46 percent lead over Evers, the state's superintendent of schools.

Walker tweeted Wednesday that he would present President Trump with a "Make Dairy Great Again" hat "to thank him for sticking up for Wisconsin’s dairy farmers in the trade deal with Canada!"

Mosinee is friendly territory for President Trump. He easily won Marathon County in 2016 with 56.1 percent of the vote.

A live explosive was found at CNN offices in New York City. It was addressed to former CIA director John Brennan. The envelope also contained a white powder.

"These cowardly acts are unacceptable and won't be tolerated," Sanders tweeted.

.@realDonaldTrump is set to arrive in Mosinee in about two hours. Already the space is filled with “Make America Great Again” baseball caps. I’ll be live here on @WBAY at 5:00 and 6:00. pic.twitter.com/fxYGnp01Yk

Check out the hat I’m going to give President Trump when he’s here -- to thank him for sticking up for Wisconsin’s dairy farmers in the trade deal with Canada! #MakeDairyGreatAgain pic.twitter.com/Kmu3uugMiT

Wisconsin absentee voters will get 2 spring ballots in the mail

Wisconsin absentee voters will get 2 spring ballots in the mail