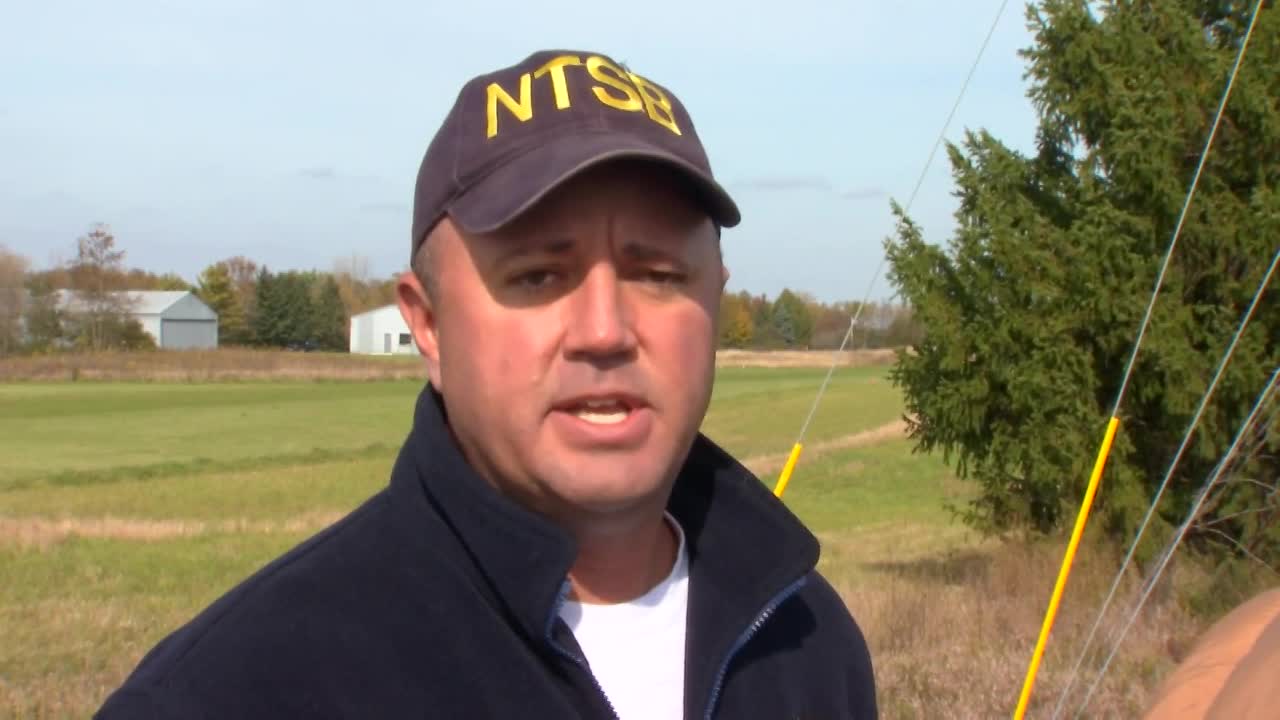 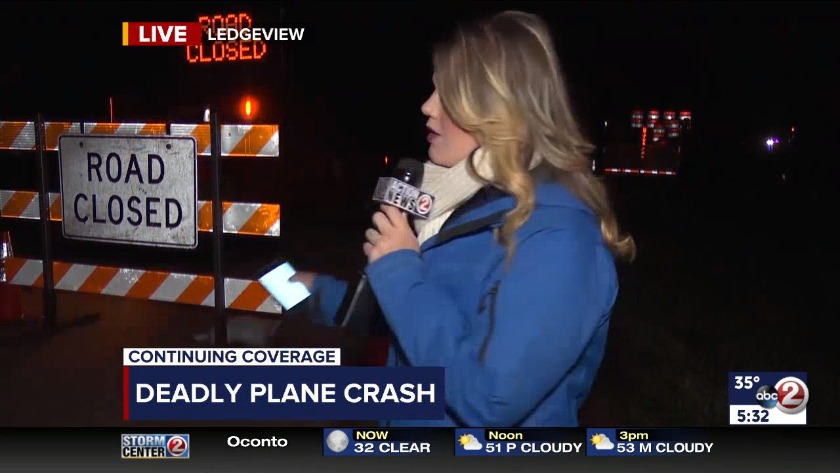 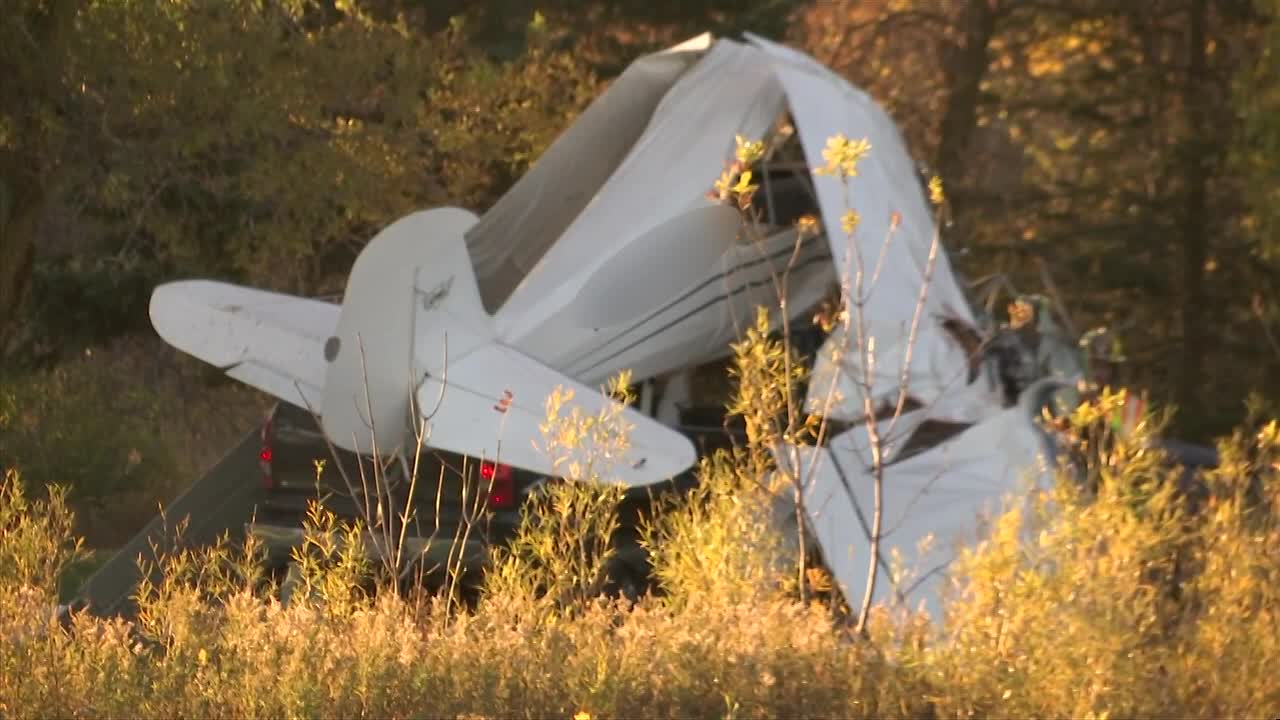 A small plane approaching an airfield off County MM in Ledgeview collided with a pickup truck on Oct. 17, 2019 (WBAY photo)

A Greenleaf man involved in a crash with a small plane has died, according to the Brown County Medical Examiner's Office.

Patrick Schounard passed away on Oct. 20. It would have been his 51st birthday, according to an obituary.

The Brown County Sheriff's Office has released names of the two men involved in a fatal crash involving a small airplane and a pickup truck.

The pilot was identified as John Fiddelke of De Pere. He died as a result of injuries he suffered in the collision Thursday evening.

The Brown County Sheriff's Office and NTSB held a news conference Friday morning to discuss the investigation. Watch the full news conference in the video above the story.

At about 4:50 p.m., a fixed-wing, single-engine plane was coming in to land on runway one at Martins Aerodrome, just off County MM (Dutchman Road). Witnesses spotted the plane flying about five feet above the road. A westbound pickup truck hit the plane. The plane and the truck veered off the right side of the road and came to rest in a residential driveway, according to the NTSB.

Pilot Fiddelke died at the scene.

The NTSB arrived Friday morning to conduct the investigation. The agency's involvement is routine in all fatal plane crashes.

NTSB Air Safety Investigator Aaron Sauer says investigators will be looking at the pilot's experience, training and medical information as they work to determine what happened.

"We understand the aircraft may have come out of maintenance, and we are talking with the mechanic, as well as reviewing any aircraft records. It does appear that some of the records from the aircraft were on board, and we have recovered some of those documents," says Sauer.

Part of the investigation will be finding out why the plane crossed the road so low -- just 5 feet off the road.

"I can't speculate on what the pilot's decision there was to be five feet off of the roadway at the time. Certainly again we'll take witness information and take a look at the aircraft to see if there were any issues there," says Sauer. "As you can see the runway behind us is very close to the edge of the roadway surface. So we'll still have to try to piece some of that information together, why the aircraft was where it was and came in contact with the truck."

At the time of this publication, the plane is still on top of the pickup truck. Sauer's team is waiting for a recovery crew to safely move the vehicles to a secure location.

"The aircraft is still on top of the truck, so there are some hazards that we have to be careful," says Sauer. "The aircraft and the truck will be secured in a location until we can do further follow-up examination. There's certain documentation that we can do here while on scene, but then we will do a more detailed examination in the near future."

The NTSB will perform a detailed examination of the vehicles.

In their investigation, the NTSB looks at three things: man, machine and environment.

Skies were overcast during the incident. Winds were calm to light. It was still daylight.

Dutchman Road was closed between Hidden Valley Lane and Rookie Lane, across from Fonferek's Glen park in Ledgeview for about 24 hours.

Video from the scene shows the plane appears to have come to rest on top of the pickup truck, which went off the road.

Debris was scattered in the road, in the ditch and in the field where the plane ended up. First responders worked for hours to clean up the debris. We saw vehicles from the Ledgeview Fire Department, Brown County Sheriff's Office and Wisconsin Public Service.

The NTSB plans to release a preliminary report on the crash next week. It will include updates on the investigation and witness statements.

It takes six months to a year for the agency's full report on the crash. The NTSB will compile the mechanical investigation with autopsy reports and toxicology results.

Here you can see a mangled plane and debris in the field. @WBAY pic.twitter.com/vhanvIe315

Some lawmakers favor a moose hunt at Isle Royale

Some lawmakers favor a moose hunt at Isle Royale