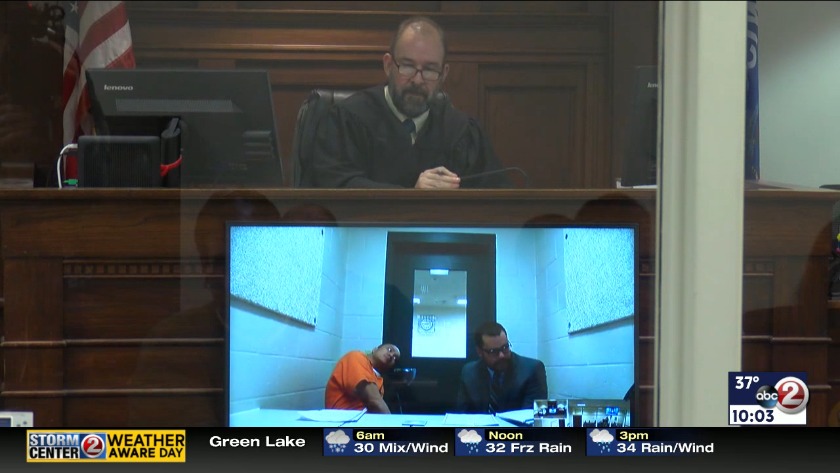 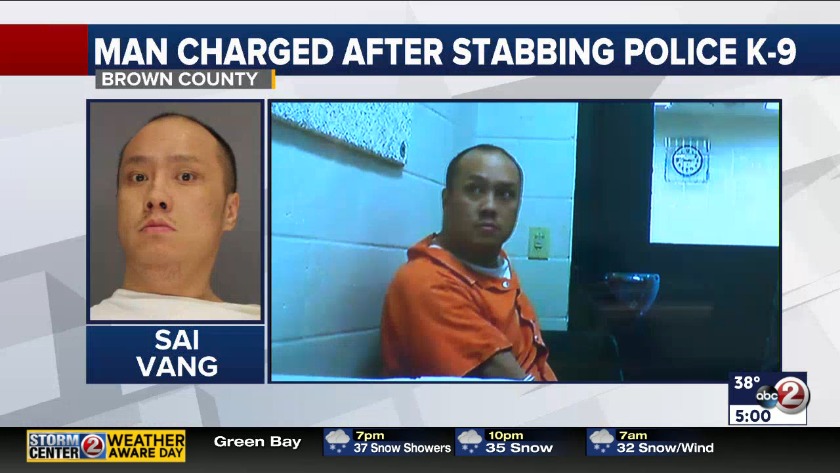 Sai Vang, 30, is charged with Strike/Shove/Kick a Police/Fire Animal - Cause Injury (Felony); Disorderly Conduct (Misdemeanor); and Resisting or Obstructing an Officer (Misdemeanor). The first two counts include a modifier of Use of a Dangerous Weapon.

Sai appeared in Brown County Court via video from jail. A judge ordered a $10,000 cash bond. Vang was already under state supervision for a prior theft.

"The most serious charge carries seven-and-a-half years exposure with the enhancer that he's facing. He's on supervision, so at least at this point it seems a moot point," Court Commissioner Paul Burke said.

A criminal complaint obtained by Action 2 News details the events leading up to the stabbing of Pyro, who remains under 24-hour care at Fox Valley Animal Referral Center in Appleton.

On the night of April 7, a man called 911 and said that "he was going to shoot his dad with a 9 mm handgun." The number was traced back to Sai Vang's residence in the 1300 block of Western Avenue.

Responding officers were informed that Sai Vang is schizophrenic. A lieutenant spoke with Sai as officers approached the address. The lieutenant said Sai threatened to shoot police.

Officers limited their flashlight use as they responded to the area. They didn't want to alert Sai of their location. Western Avenue was dark. A layer of fog was forming.

The lieutenant ordered Sai to come out of the home. He told Sai that Community Crisis Intervention Training Officers were available to speak with him.

The front door of the address swung open and a man came out. He walked toward Western Avenue. It was Sai Vang. Police ordered him to the ground. He responded with a "F--- You."

Police lit up their flashlights to illuminate Sai so they could see his location in the dark and fog.

"I could see that Sai's left hand was near the left side of his head, and that his right hand was near his waistband," one officer said. The officer could not see what he had in his hand. Officers were not sure if it was a gun or a knife. The weapon had a black handle. Police yelled at him to show his hands and get on the ground.

Sai was "closing the distance" that officers had created. He refused to comply with orders. Sai reached toward the black handle in his waistband. Officers retreated to the Bearcat, fearing he had a gun. Officer Scott Salzmann had his K-9, Pyro. He warned Sai that he was going to deploy the dog. Sai still did not comply. Salzmann yelled "Packen!" That's the command for the dog to bite.

Pyro ran toward Sai and jumped up on him. It appeared Pyro bit Sai on the upper left arm or shoulder. An officer said he saw Sai spin counterclockwise. Sai removed the black-handled weapon from his waistband. It was a "large boning-style knife."

"I watched as Sai started violently swing the knife upward, in a stabbing motion, at K-9 Pyro," reads one officer's story detailed in the criminal complaint.

This officer decided to use his Taser. He said he believed it was the only way to save Pyro's life in this situation. He informed Officer Salzmann, who gave his permission.

When the Taser hit Sai, he was incapacitated. Pyro let go and ran to the south. Sai fell to the ground and the knife fell out of his hand.

Officers moved in and took Sai into custody.

They found Pyro "lying on the grass between the sidewalk and the road. K-9 Pyro looked dazed, and was panting. He was also bleeding from his mouth," reads the complaint.

At first, officers thought it was Sai's blood. As they looked closer, they saw Pyro was bleeding from the neck. The dog was coughing up blood.

One officer described the blade on Sai's knife to be about five inches long. There was blood at the three-inch mark.

Sai was taken to a hospital for medical attention and then to a crisis center. Sai told an officer that he was sorry and "that he was trying to get help for his neck." He also told officers that he wanted his doctor arrested.

Sai explained that he stabbed Pyro on instinct "because he is scared of dogs."

"On 4/7/10 I was freaking out about my back, I called the police to come get me so they could fix my neck." He didn't wish to add anything to the statement.

Pyro continues to receive 24-hour care at the Fox Valley Animal Referral Center. He still has a feeding tube and an IV, and fluid drains for his injured neck, but he continues to get up and move around, even getting outside.

Pyro's handler, Officer Scott Salzmann, has been sleeping at the animal hospital to be close to his partner.

"Having his partner close and keeping Pyro calm is especially important during these critical steps in his recovery," reads a statement from Green Bay Police Capt. Kevin Warych.

Pyro has been standing, sitting and walking under his own power.

"I am profoundly impressed by the top quality medical care Pyro is receiving at the Animal Referral Center," said Green Bay Police Chief Andrew Smith. "It is truly state of the art, with highly trained and dedicated animal care professionals. I know Pyro is receiving the best treatment possible."

On Tuesday, Mayor Jim Schmitt presented Pyro with a Key to the City.

Donations for Pyro are also welcome at Nicolet Bank in Green Bay and the Green Bay Police Department.

"We won't know right now what his [Vang's] motivation was, but we can certainly say the actions of this dog very likely prevented an officer-involved shooting from occurring here in the city of Green Bay," Smith said.

On Tuesday, Officer Salzmann and his family were taking Pyro out for "short duration walks" to help him build up his strength, according to the department.

Here's a list of additional fundraisers for K-9 Pyro:

The WBAY Pet Expo (April 12-14) will be collecting donations at the door for Pyro’s increasing medical expenses and for the Brown County Sheriff’s Office K-9 unit, through the Bark N Blue Foundation. There is a $2 suggested donation for all animals attending the WBAY Pet Expo at the Resch Center. CLICK HERE for more information on the WBAY Pet Expo.

Local apparel company Global Recognition is selling a T-shirt featuring the K-9 symbol and police "thin blue line" authorized by the Green Bay Police Department. Click here to see the shirt and how to order.

"This morning, as we walked through the door there were over 550 orders," says Nicole Grieger, Director of Special Market Sales at Global Recognition Inc. "Just through the night, after the press conference at 4 p.m., is when news got it out. So less than 12-15 hours, it’s just incredible the amount of community support. And nationwide."

If you're not in Green Bay, you can send a check to the Green Bay Police Department. Include "K-9 Donation" in the memo line.

A Team Pyro Fundraiser will be held Thursday, April 11, at Bark and Brew, 2310 Lineville Rd, Suamico. Hours are 5 p.m. - 7 p.m. The business is asking for a suggested $5 donation at the door. CLICK HERE for more information about the event.

The Green Bay Police Department says it has reports of a caller asking for "donations" for K-9 Pyro. Police say this is a scam -- they do not solicit donations over the phone.

They compare it to scam calls that tend to follow natural disasters, where someone is taking advantage of an unfortunate situation to prey on good people.