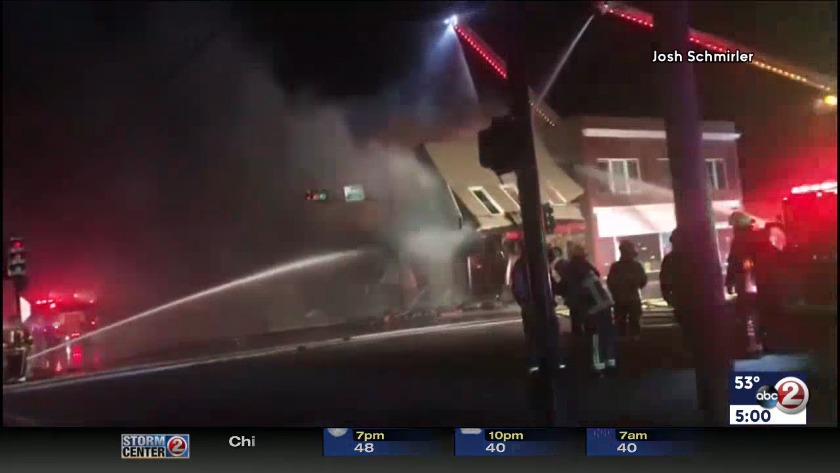 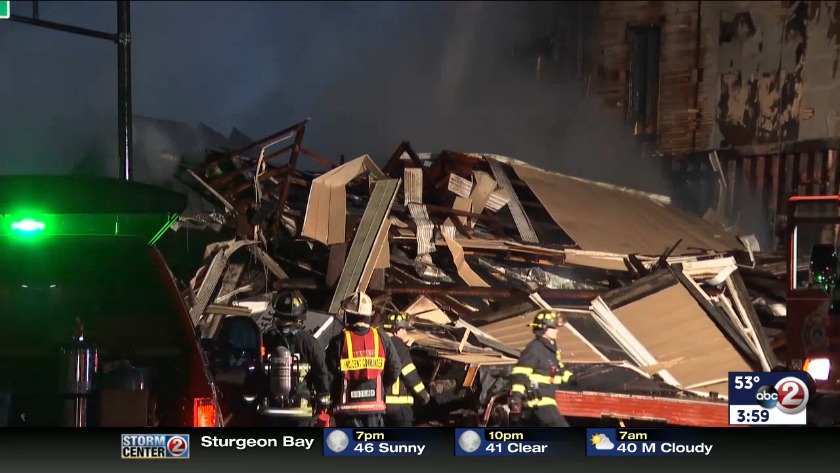 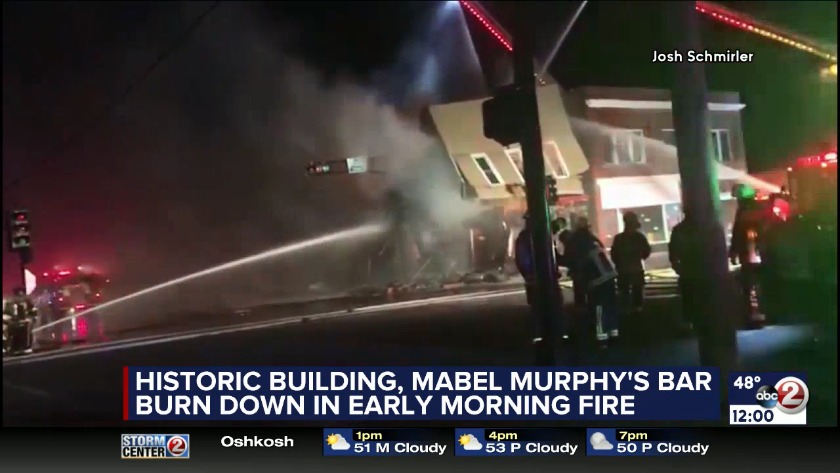 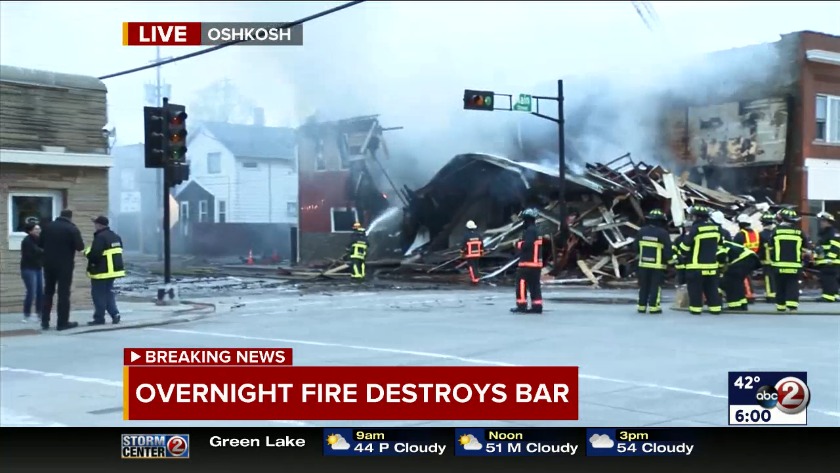 At 1:42 a.m., crews were called to a fire at 705 N. Main St. They arrived to find heavy flames coming from the back of 705 and 703 N. Main. Both buildings had apartments above businesses.

Authorities believe the fire started one one of the back porches and strong north winds spread the fire to Mabel Murphy's bar at 701 N. Main St.

"After burning for a little more than an hour, Mabel Murphy's collapsed," reads a statement from the fire department.

"It was burning pretty good and I'm sure the fact this it is such an old building, an Oshkosh institution, that it caused such a horrible fire," says Oshkosh Fire Department Public Information Officer John Holland.

There were four tenants and four other people in the apartments above the buildings. All eight people escaped without injury. They're being helped by the American Red Cross.

A firefighter suffered a tweaked knee.

"Unfortunately, there's nothing left. Very, very sad. This was an Oshkosh icon," says Holland. "I don't know how long it's been here, but it's been here as long as I have."

Mabel Murphy's bar was close to celebrating 45 years in business. The building dates back to the 1890's.

"My instinctual thought was this can’t be real," says Aaron Ebert, Mabel Murphy's patron. "We were just in there three nights ago. Woke up this morning to this, and just heartbreaking that we’ll never be in that bar again."

Officials think the fire started in apartments and then spread to the bar.

The cause of the fire is under investigation.

Patrons stopped by the scene to see what remains of Mabel Murphy's bar.

"I had to walk down after work and just kind of see what needed to be done and what they're going to do," says John Timmerman of Oshkosh.

"It was a place that made you want to come back, and now to see it's not there, it's just, it's kinda sad," says Allan Zalewski of Oshkosh.

Oshkosh resident Wendell Morris says, "I was just here two weeks ago. Always came into this place. It was something that was a part of Oshkosh and every time you drove down Main Street you expected it to be there."

Firefighters were able to save Mabel Murphy's famous sign.

"I can't believe, first of all, it was intact when the entire building collapsed," Holland says. "But it is part of our history here in Oshkosh."

The Oshkosh Fire Department believes the building next door to Mabel Murphy's is destroyed.

An Oshkosh bar is destroyed after an overnight fire.

Around 1:45 Tuesday morning, firefighters were called to the fire at Mabel Murphy's bar at the corner of North Main Street and Irving Avenue.

"Unfortunately, there's nothing left, very, very sad, this was an Oshkosh icon," Oshkosh Fire Department Public Information Officer John Holland said about Mabel Murhpy's, "I don't know how long it's been here. But it's been here as long as I have."

We're told the bar was close to celebrating 45 years in business and that the building dates back to the 1890's.

Officials think the fire started in apartments in the building next door and then spread to the bar. They say four people in those apartments got out safely on their own.

We don't yet know how the fire started.

The Oshkosh fire department tweeted that the intersection of North Main and Irving could be closed until 7:00 or 8:00 this morning and they asked people to avoid that area.

Action 2 News is working to get more information on this developing story.

Lots of people in the community of #Oshkosh are bummed over the loss of this historic building and iconic bar, Mabel Murphy's. @WBAY pic.twitter.com/aqd4GMQ45k

TRAFFIC ALERT: intersection of North Main and Irving Avenue closed in Oshkosh because of a major fire at Mabel Murphy's bar. Officials ask you to avoid the area. They say the intersection could be closed until 7:00 or 8:00 this morning. #TimesaverTraffic pic.twitter.com/tq9PiZ411u