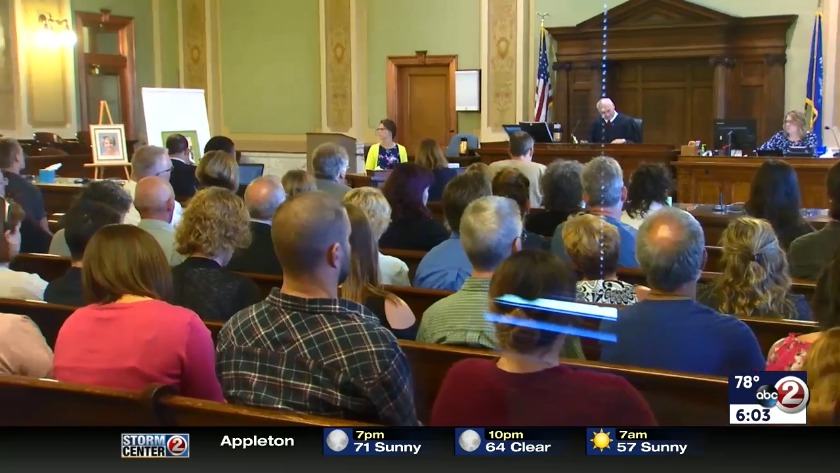 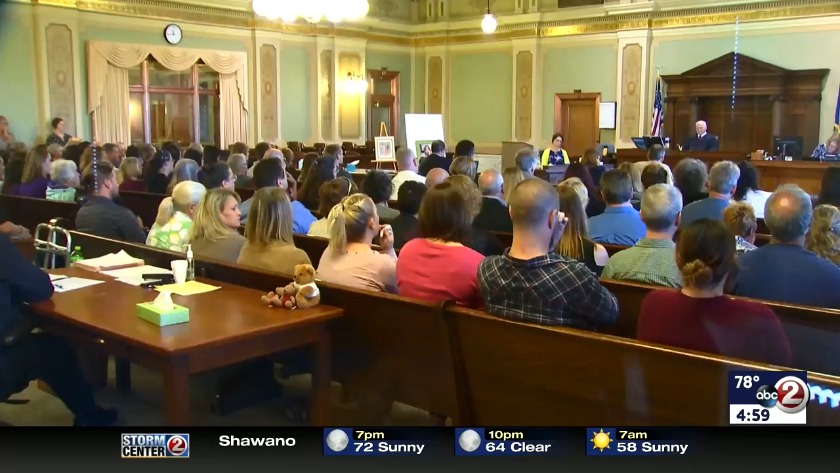 BROWN COUNTY, Wis. (WBAY) - A man convicted of killing a mother and daughter in a drunk driving crash has been sentenced to 10 years in prison.

David Meyer, found guilty of two homicide charges in the deaths of Rebecca and Raelia Pennenberg, told a packed courtroom Tuesday that he finds it difficult to live with himself.

"There's no words that I can say to give them any peace. I find it difficult to live with myself, for what's happened," Meyer said. "I can promise that I will live every day for the rest of my life trying to make amends for this."

Judge William Atkinson sentenced Meyer to 10 years in prison for each count. The sentences are concurrent, which means he'll serve them at the same time.

Judge William Atkinson broke down in tears, frustrated by the number of tragic cases he's heard related to drunk driving.

"I will not spend one dime supporting the alcohol industry. I am so tired of a society, and more prevalent here in the state of Wisconsin, of being brainwashed, into believing that you need alcohol to enjoy life," Judge Atkinson told the court.

Prosecutors said Meyer was drunk when he hit Rebecca Pennenberg, 44, and her daughter, Raelia, 18, as they were walking on French Road in the town of Lawrence. The crash happened in August 2017.

The Pennenberg women were pronounced dead at the scene.

"I am haunted by the fact that they were coming home to see me," reads a statement from Mike Pennenberg, the husband and father.

"I am scared, stressed, overwhelmed, and most of all, heart-broken. No one has ever loved me as much and as completely as Becky and Raelia did."

As officers tended to the Pennenberg women, they saw Meyer standing a few feet away from the crash scene. He "appeared very distraught and kept saying he was sorry," according to the criminal complaint.

Meyer told police that he didn't see the women before it was too late. The women were walking on the west side of the center line. Meyer said he crossed the center line and hit them.

Police said Meyer told them he had two beers, but he blew a 0.219 on a Breathalyzer. That's more than two-and-a-half times the legal limit to drive in Wisconsin.

Prosecutors asked the judge to sentence Meyer to 22 years in prison. The defense asked for less time behind bars and more probation, saying, "There is no punishment enough that will punish him the way he will punish himself."

Meyer's father asked the court to have mercy on his son. Meyer's friend testified that Meyer is a "hard worker" and a "kind-hearted soul."

In addition to the prison sentence, Meyer will serve 10 years on extended supervision following his release.

BREAKING: David Meyer has been sentenced to 20 years in prison and 20 years extended supervision. @WBAY #DavidMeyerSentencing

Still in tears Judge Atkinson says “I will not spend one dime supporting the alcohol industry.” @WBAY #DavidMeyerSentencing pic.twitter.com/j5WQCjjsky

Judge Atkinson is in tears right now. He says "I recognize the pain..." there are tears by dozens in the courtroom watching and listening to the judge cry to catch his breath. @WBAY He says "I've seen too many of these cases." #DavidMeyerSentencing

David Meyer is now making a statement: "I think about what I can say to ease the pain...I find it difficult to live with myself after what's happened...I will continue to tell people that when you drink, the 1st thing you lose is your judgement." @WBAY #DavidMeyerSentencing pic.twitter.com/h22QZatuV8

Defense is now making closing statements asking for less prison time, extended supervision, and more probation time. Defense says "there is no punishment enough that will punish him the way he will punish himself." @WBAY #DavidMeyerSentencing

David Meyer's father is now speaking. He says he prays the two families find peace. He says David is kind and respectful. He asked the court to have mercy for David. @WBAY #DavidMeyerSentencing

Defense now bringing forth people who are making statements on behalf of David Meyer. A friend says "he was a hard worker, David as a person is a kind-hearted soul." @WBAY #DavidMeyerSentencing

State prosecutors asking for 22 years in prison and 10 years extended supervision. He says "a very serious crime should come with a very serious sentence." @WBAY #DavidMeyerSentencing

Statement made by the husband/father of the victims is being read: “I am haunted by the fact that they were coming home to see me.” @WBAY pic.twitter.com/HL1BXDMQ2Q

The courtroom is full this morning. Several people have to stand. #DavidMeyerSentencing @WBAY