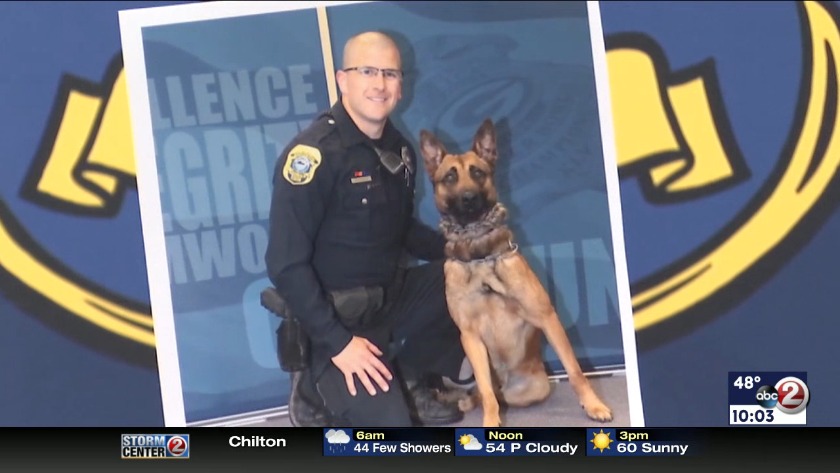 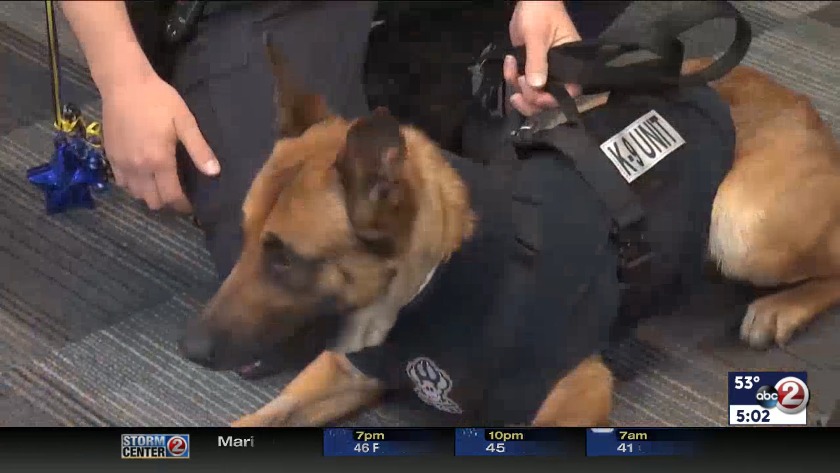 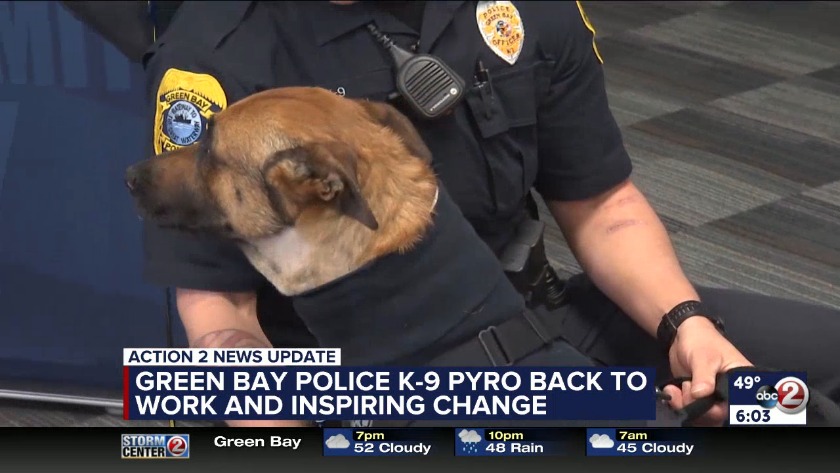 GREEN BAY, Wis. (WBAY) - K-9 Pyro made his public debut Monday after the April 7 stabbing that nearly took his life.

"I'm a firm believer that some miraculous things happened with Pyro and it's through all the thoughts and cares and concerns through the public," said Salzmann.

After Pyro made his appearance, Officer Salzmann stood up to the microphone to thank the community and his family and colleagues for their support. He choked up at times.

"I wanted to take this time to say thank you," Salzmann said, holding back tears. "It truly has been amazing."

The K-9 was stabbed multiple times during a weapons call in the 1300 block of Western Avenue. Pyro spent a little more than a week under 24-hour care at Fox Valley Animal Referral Center in Appleton. Officer Salzmann stayed at the hospital with Pyro to keep him calm.

However, it wasn't long until Pyro was standing, sitting and walking on his own power.

Pyro's doctor, Sue Leonard, credits the actions of the officers at the scene.

"Because of the training that Officer Salzmann and the other officers had, when they moved Pyro to safety, they immediately started examining him and surveying his injuries. And they realized right away that it was life-threatening, and he was coughing up blood," Sue Leonard says.

Leonard says officers made the right decision to take Pyro to Green Bay East Animal Hospital first. She says in a time of crisis, it is best to go to the closest emergency facility.

The Green Bay team was able to stabilize Pyro before he was transferred to the Fox Valley Animal Referral Center. Leonard says Pyro would not have survived if they opted to drive him immediately to Appleton.

"He had suffered significant blood loss. His injuries--we're not making them up--he almost died from the injuries in his neck," Leonard says.

Pyro had surgeries to repair wounds to his neck, carotid artery, and esophagus. The next day, he had another surgery to repair a flipped stomach.

Doctors gave him a breathing tube and a feeding tube.

There was also injury to nerves in neck. Pyro has trouble holding his left eye open, but doctors hope that issue will go away.

"Really, his recovery was miraculous from that point forward," Leonard says.

Pyro was released from the hospital on April 12 and is at home with Officer Salzmann. He's been authorized to return to limited active duty.

Green Bay Police Chief Andrew Smith says Pyro will be given light-duty assignments. This includes drug-sniffing and training. He won't be able to track because of the pressure it puts on his neck.

"He's basically going to be doing drug sniffs. So he'll do drug sniffs, he'll do some training, we'll make sure everything is right with him physically, but he just really wanted to get back I think in the field," said Chief Smith.

"Pyro is physically 110 percent. He's mentally 110 percent. However, it's really crucial for the next month that we be cautious about any pressure on his neck because of the healing of the esophagus and the nerves," Leonard says.

Pyro's feeding tube is long-gone. He's back to eating his kibble--much faster than doctors expected.

Leonard says it is possible Pyro will need some corrective surgeries down the road, but they'll have to wait and see. The esophagus is the main concern.

"For me, I've spent the last year riding with him every day, any shift that I work, any overtime shifts that I work, anything I do he's been with me so it would've been extremely weird for me to come back to an empty car and not have him with me. So just the fact that he can come ride along with me and we can continue our bond and our friendship, it's amazing," said Salzmann.

"My dog did everything he was supposed to do and in all of that suffered some major trauma and still stayed with the man, still did his job until I told him not to. What more can you ask from a K-9 in his career? You know that's a career making opportunity there and Pyro did his job and it's definitely a proud dad moment," Salzmann adds.

The man who stabbed Pyro, Sai Vang, has been charged in the case. He's being held on a $10,000 cash bond. A judge has ordered a competency exam. Sai Vang's competency hearing is scheduled for May 24.

"If we didn't have that dog there's a very good chance this could have resulted in an officer-involved shooting. I'm convinced that probably Mr. Vang wouldn't be here today if it was not for that hero dog, Pyro," Smith says.

"We will 100 percent be able to fund them as the account is at over $62,000. Thank you," said Heather Heil, Bark N Blue Foundation president.

Local apparel company Global Recognition has closed its orders for #TeamPyro t-shirts. The company has received orders from as far away as Alaska and Hawaii. Proceeds go to Pyro's medical costs and the Green Bay K-9 Program.

Chief Smith says the maximum insurance will pay for Pyro's medical costs is $5,000. They have not received the bills for Pyro's hospital stay yet.

Pyro's recovery has also inspired the Green Bay Metro Fire Department to train their first responders on how to treat police K-9's in case anything like this happens again.

"We've also worked in partnership with the police department to try and change some of our policies that if this were to happen in the future we would be more than happy to take care of those K-9 officers and transport them to whatever facility that they need," said Ryan Gibbons, Battalion Chief, Green Bay Metro Fire Department.

K-9 Pyro is back and full of energy ! @WBAY pic.twitter.com/IVxZZ4ShLf

"We need to double down": Dr. Rai stresses physical distancing as peak approaches