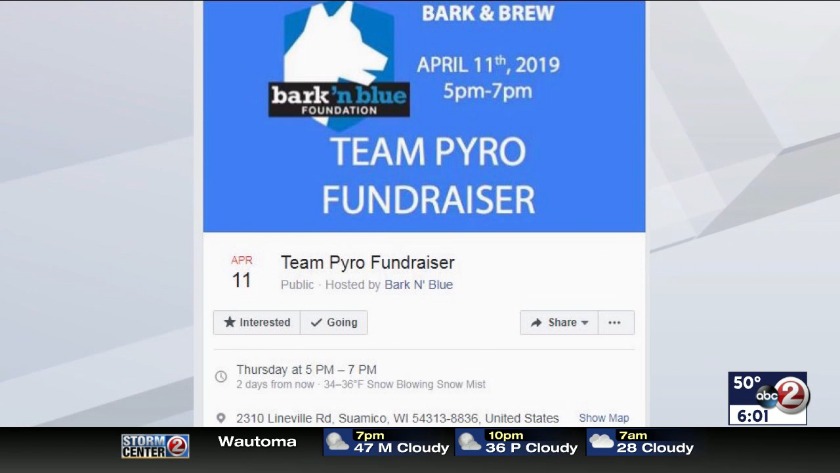 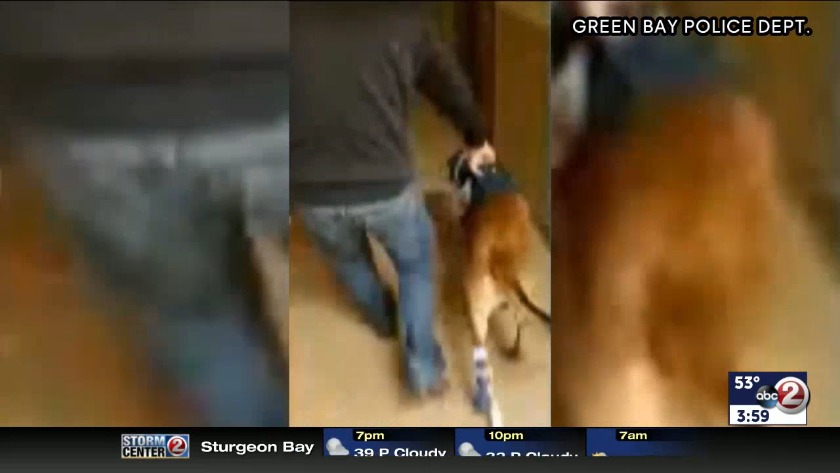 GREEN BAY, Wis. (WBAY) - Green Bay K-9 Pyro is standing, sitting and walking under his own power as he recovers from stab wounds.

Officer Scott Salzmann and his family have been taking Pyro out for "short duration walks" to help him build up his strength, according to the department. Officer Salzmann is Pyro's handler.

"My phone is buzzing continually in my pocket because of the video," says Capt. Jeremy Muraski, Green Bay Police Dept. "It’s only 7 seconds, but it’s him walking for the first time since this horrible event. It just gets you right here."

"His improvement over the past 24 hours was a big first step for him and we have been told his personality is starting to come back," reads a statement from Green Bay Police. "While Pyro still has a ways to go, he appears to be responding well to his treatment thus far which is a testament to his toughness and will and to the skill and dedication of his veterinary team at the Animal Referral Center and the many thoughts and prayers he has received from the community."

Mayor Jim Schmitt on Tuesday met with Pyro and gave him the key to the City of Green Bay.

The K-9 Pyro Fundraiser on Facebook has raised $32,955. Due to the enormous outpouring of support, the organizers have had to raise the fundraising goal several times. Donors have until 8 p.m. Tuesday to give.

"One of the things we have been blessed by, and frankly overwhelmed by: the amount of support that has come out from businesses in the community and people in our community," says Capt. Muraski.

Donations for Pyro are also welcome at Nicolet Bank in Green Bay and the Green Bay Police Department.

The Belgian Malinois came out of that surgery and was photographed sitting up with his doctors Monday.

"He still has a long way to go as far as recovery. I would say it's hour-by-hour, day-by day for awhile here. Because of the severity of the wounds. Because of the scar tissue that's going to form in his esophagus may cause some problems and some complications with him eating, so we're concerned about that," Green Bay Police Chief Andrew Smith said Monday.

Green Bay Police responded to a call around 8:19 p.m. Sunday for a man with a gun on the 1300-block of Western Avenue.

Chief Smith says the suspect, identified as Sai Vang, refused orders to comply with officers and submit to a lawful arrest. The officers deployed Pyro, who is trained to jump on the suspect and knock him down in these situations.

"Unfortunately, unbeknownst to the officers, this individual was armed with a knife. Mr. Vang used that knife to slash at and stab several times in the throat of Pyro," Chief Smith says.

Sai Vang has been booked into the Brown County Jail. Police have recommended charges of Harassing Police Animals - Cause Injury; 2nd Degree Recklessly Endangering Safety; Resisting or Obstructing an Officer; and a Probation Violation.

"We won't know right now what his [Vang's] motivation was, but we can certainly say the actions of this dog very likely prevented an officer-involved shooting from occurring here in the city of Green Bay," Smith says.

Officers loaded the injured Pyro into the Bearcat and drove him to Bay East Animal Hospital prior to his transfer to Fox Valley Animal Referral Center. K-9 officers carry a medical kit and officers used a clotting agent in that kit and applied it to Pyro's neck during transport. Doctors said that saved Pyro's life.

"Very scrappy. He's very, very tough. I'm told to get him under it took several doses of fentanyl. He just didn't want to get knocked out so they could perform the surgery. So he is one tough, scrappy dog," Smith says.

Pyro's actions are already nominated for two awards. Green Bay Police Capt. Jeremy Muraski says one award is the Blue Line Award. It's similar to a military Purple Heart that goes to individuals injured in the line of duty.

The second award is for heroism. Nominations go to the department's awards committee and are presented at a ceremony.

"The reaction in general has been unbelievable. We are stunned. You start to see numbers on your Facebook page. We have had over 650,000 people viewing the posts," Muraski says.

Pyro is two-and-a-half years old. He is a narcotics and tracking dog.

Here's a list of additional fundraisers for K-9 Pyro:

The WBAY Pet Expo (April 12-14) will be collecting donations at the door for Pyro’s increasing medical expenses and for the Brown County Sheriff’s Office K-9 unit, through the Bark N Blue Foundation. There is a $2 suggested donation for all animals attending the WBAY Pet Expo at the Resch Center. CLICK HERE for more information on the WBAY Pet Expo.

Local apparel company Global Recognition is selling a T-shirt featuring the K-9 symbol and police "thin blue line" authorized by the Green Bay Police Department. Click here to see the shirt and how to order.

"This morning, as we walked through the door there were over 550 orders," says Nicole Grieger, Director of Special Market Sales at Global Recognition Inc. "Just through the night, after the press conference at 4 p.m., is when news got it out. So less than 12-15 hours, it’s just incredible the amount of community support. And nationwide."

If you're not in Green Bay, you can send a check to the Green Bay Police Department. Include "K-9 Donation" in the memo line.

A Team Pyro Fundraiser will be held Thursday, April 11, at Bark and Brew, 2310 Lineville Rd, Suamico. Hours are 5 p.m. - 7 p.m. The business is asking for a suggested $5 donation at the door. CLICK HERE for more information about the event.

In 16 years of service, I’ve never given a key to the City to a canine before. Well deserved, Pyro! pic.twitter.com/6MFDXqTpgN