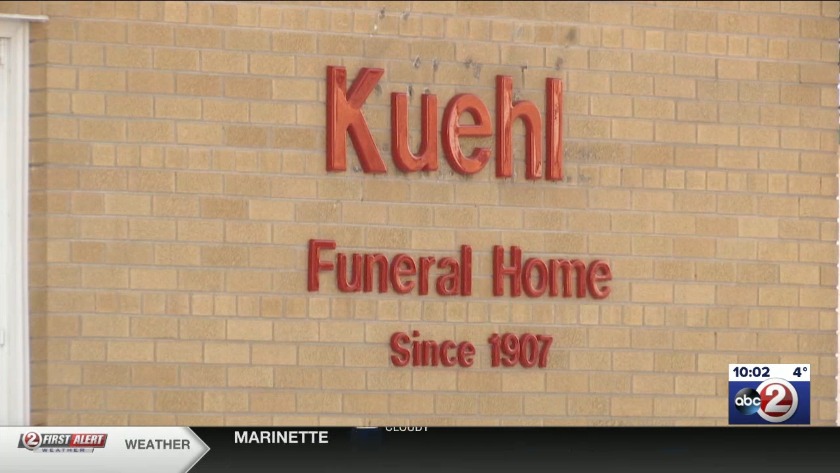 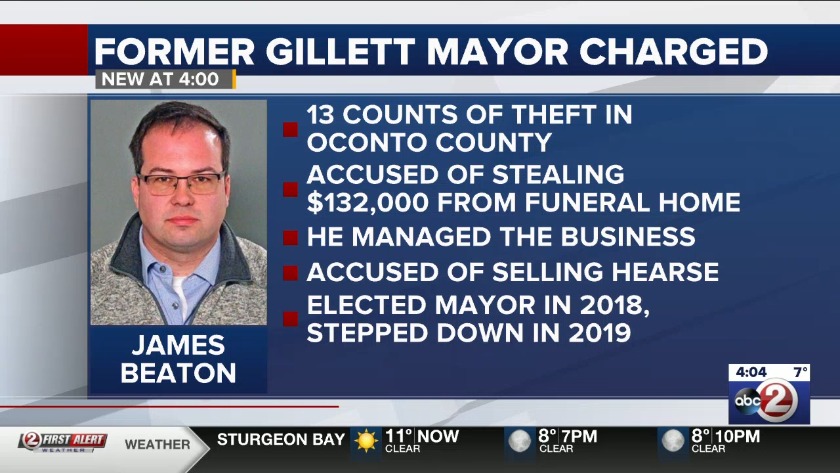 OCONTO COUNTY, Wis. (WBAY) - The former mayor of Gillett has been charged with 13 counts of theft for allegations he stole tens of thousands of dollars from the funeral home he managed.

Action 2 News has obtained a criminal complaint filed against James A. Beaton, 39, in Oconto County.

On Sept. 9, an Oconto County deputy was called to Legacy Funeral Chapel on E. Main Street in Gillett. There was an allegation that Beaton had been embezzling from the business and that he sold a hearse without consent.

"It's kind of a shock throughout the community and a shock to myself because you would never expect it from the former mayor," said Josh McCarthy, the interim Mayor. He is also running for Mayor in this year's election.

In 2018, Beaton mounted a successful write-in campaign to be elected mayor of Gillett.

In 2019, the Gillett City Council asked him to resign over not meeting the residency requirement. Beaton stepped down.

"It was a little bit rough at first because he was devoted to his duties as the mayor," said McCarthy. "It got some push back, but we dealt with it. In the end, we do believe we made the correct decision."

The previous owner of the funeral home told investigators that Beaton took out a $32,000 credit card and a $35,000 line of credit in the name of Kuehl Funeral Home.

The complaint states the former owner alleged Beaton sold one of the funeral home's hearses to a company in Appleton for $22,000. The check was made out to Beaton and the money had been deposited into Beaton's personal checking account.

He stated he did not give Beaton permission to sell the hearse or put the money in Beaton's personal checking account.

The former owner also produced paperwork that showed he still owed the bank $24,000 on the hearse that had been sold.

The former owner stated Beaton had been with the funeral home as a manager for about five years. Beaton had changed the name of the funeral home from Kuehl Funeral Home to Legacy Funeral Chapel and given himself the title of Vice President. Beaton was allegedly claiming to be the owner of the business.

The former owner also alleged that Beaton "had been using un-licensed people to remove bodies from places of death," reads the criminal complaint.

The former owner stated that "he had to take out $100,000 line of credit to pay off all the funeral home's debt accumulated by Beaton."

After the sale of the funeral home, phone calls came in from casket companies, vault companies and creditors claiming Beaton owed them money for services. There was also an issue of unpaid property taxes.

In 2017, 2018, and 2019, investigators found thousands of dollars in discrepancies and unauthorized payments from the funeral home's bank account.

An accountant found that between Sept. 2017 and Sept. 2019, Beaton had misappropriated about $132,000 from the funeral home account.

McCarthy says the new owners are just trying to start over.

"The new funeral home owners have nothing to do with this. They're really good people, they had an open house here in December. They just want to reassure they're not apart of this and they look forward to making this business venture possible," said McCarthy.

According to Legacy Care Partners website, Beaton is from the east coast and earned his degree in Mortuary Science in Massachusetts. He relocated to Wisconsin and then Gillett in 2015.

Kaukauna community works together to support family after child deaths

Kaukauna community works together to support family after child deaths