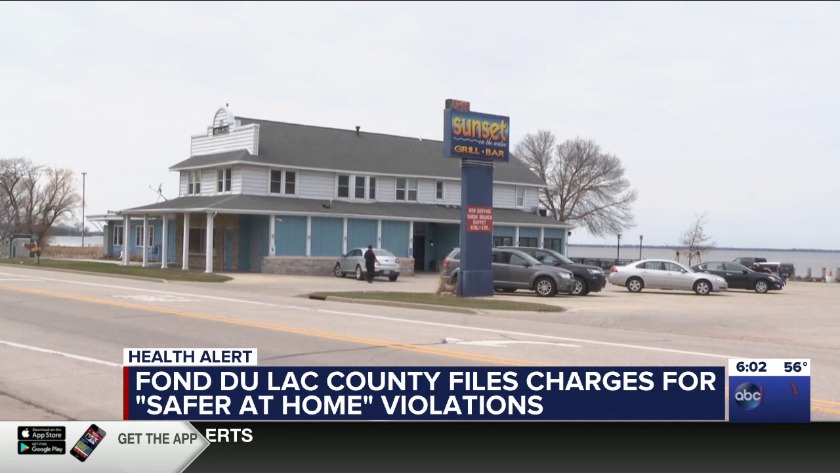 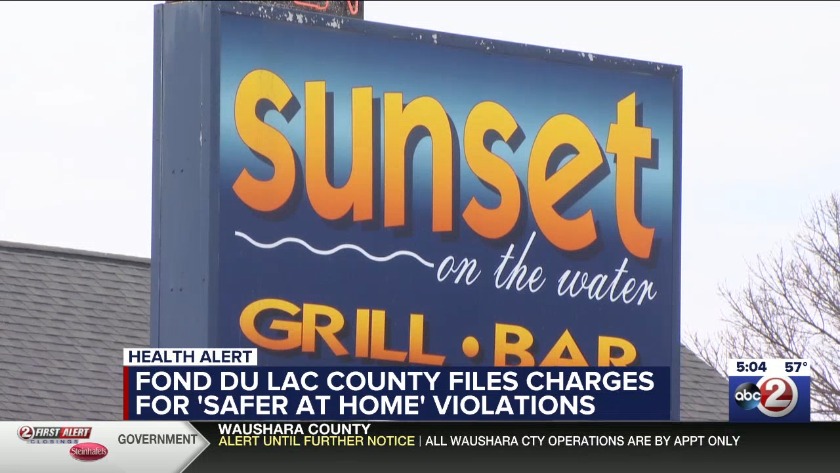 It's been more than a week since Governor Evers issued the order, shutting down non-essential businesses, tightening restrictions on where people can go, all in an effort to stop the spread of the coronavirus.

Fond du Lac County District Attorney, Eric Toney, is the first in our area to file charges against multiple people for violating the governor's "Safer at Home" order.

According to Toney, "Nobody from public health to law enforcement to the DA's office takes any pleasure in having to go through this type of enforcement, but there's a public health emergency and we all want to make sure people are safe."

Included in the first set of charges are cases against three women who violated the order just days after it was enacted. According to the criminal complaint, Maria Katris, owner of Sunset on the Water, a supper club in Taycheedah, was working in the kitchen of her restaurant last friday night with more than a dozen people. Employee, Jamie Bray was working in the bar, taking orders for takeout both over the phone and in person, several people had been served drinks at the bar and were just hanging out.

Those actions were all violations of the governor's order, leading to the charges against the two women.

A deputy on scene also found another woman, Michelle Matteson, in the dining room of the restaurant. She admitted to eating her meal inside the supper club. Sit down meals in restaurants are not permitted, by governor's order, at this time. Matteson will soon also receive a summons.

Brad Lenz, who owns and operates airbnb on Overland Trail in Fond du Lac County is the fourth person to be charged with misdemeanors.

While he is allowed to welcome guests into the home, under the governor's order, an issue arose, when some of the guests from Illinois admitted to authorities, who were called to the house after someone reported violations to the safer at home order, that they were using the indoor swimming pool at the home. Use of the pool is not permitted under the governor's order.

The guests told deputies, however, they had permission from Brad Lenz to use the pool and only rented the home because of the indoor swimming option. The criminal complaint says Lenz told authorities he never told the guests they could use the pool.

"In some circumstance, if somebody has a property rental, depending on the filings and things of that nature are, it could be considered a hotel or motel and if that's the case then it fits on with one of those emergency #12 exemptions, but they still have to comply with the other regulations within that order as it would apply to a hotel or motel," says Eric Toney.

Lenz, along with Bray, Katris, and Matteson are all scheduled to appear in court on May 8th to answer to the charges. The misdemeanors they're facing carry a maximum of 30 days in jail and or a $500 fine.

Older people and those with underlying health conditions (heart disease, diabetes, lung disease) are considered at high risk, according to the Centers for Disease Control and Prevention. People with those conditions should take the proper precautions.

COVID-19 is spread when an infected person coughs or sneezes.

"The virus is found in droplets from the throat and nose. When someone coughs or sneezes, other people near them can breathe in those droplets. The virus can also spread when someone touches an object with the virus on it. If that person touches their mouth, face, or eyes the virus can make them sick," says the Wisconsin Department of Health Services.

Symptoms include fever, cough, and shortness of breath. CLICK HERE for more information on symptoms. Emergency signs include pain and pressure in the chest, confusion and bluish lips or face.

The CDC believes symptoms may appear between two and 14 days after contact with an infected person.

VISIT wbay.com/coronavirus for complete local, national and international coverage of the outbreak.

DHS recommends taking these steps to help stop the spread of the virus:

--Frequent and thorough handwashing with soap and water.
--Covering coughs and sneezes.
--Avoiding touching your face.
--Staying home when sick.

The Centers for Disease Control and Prevention is recommending everyone in the United States avoid large events and mass gatherings for at least eight weeks.

The virus originated in Wuhan, China. The spread started in December 2019.