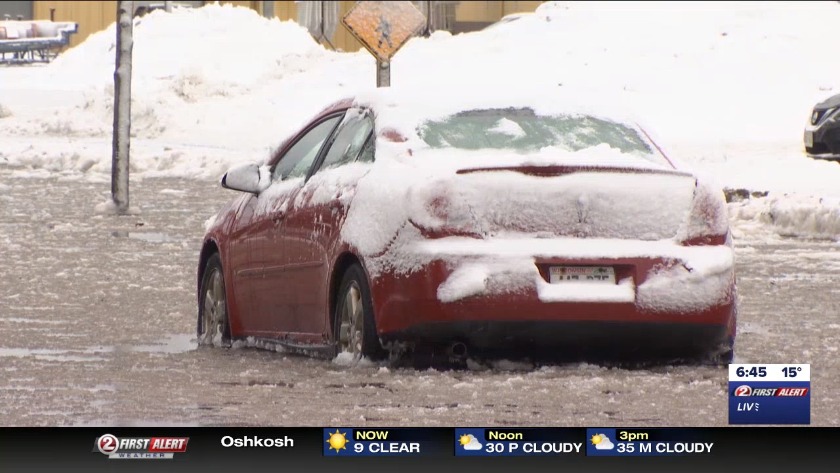 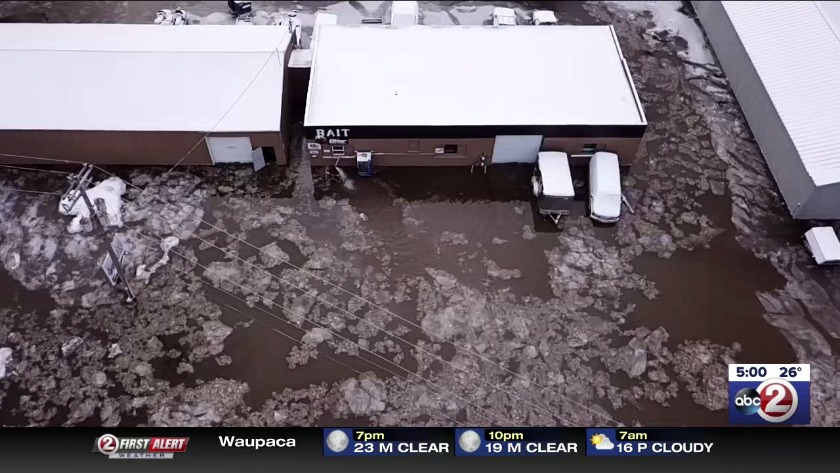 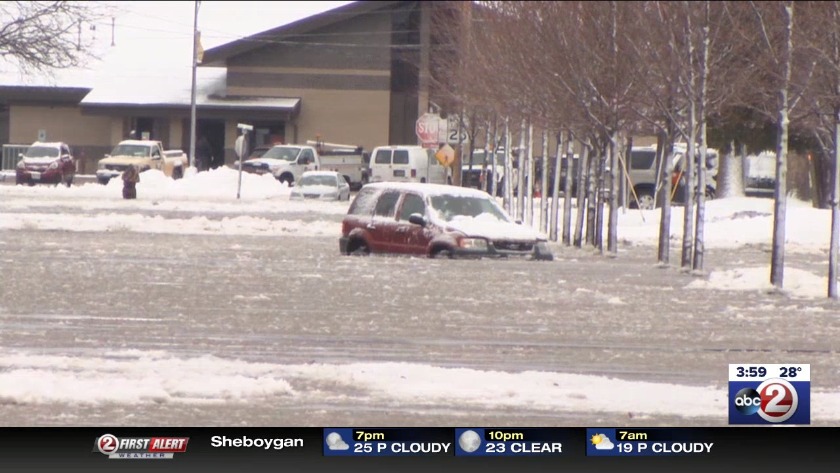 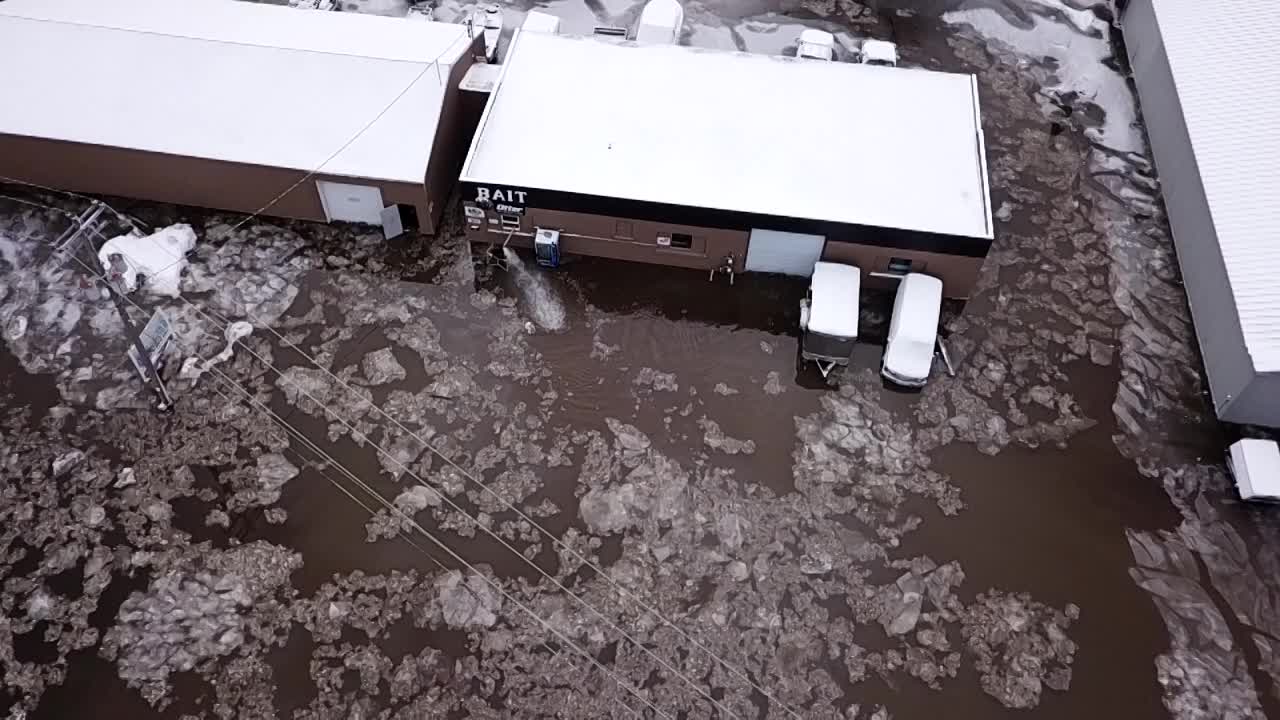 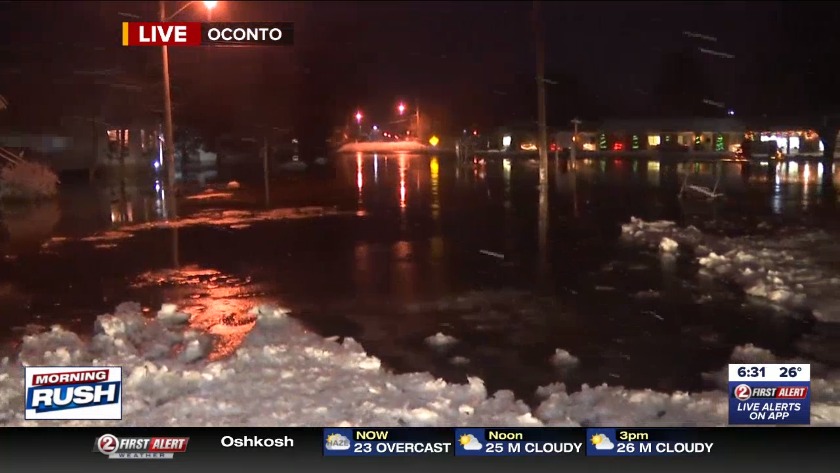 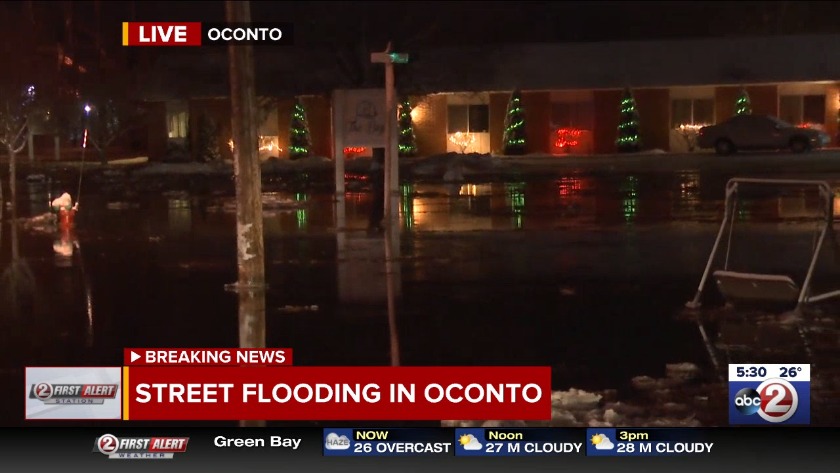 OCONTO, Wis. (WBAY)- The National Weather Service in Green Bay says an ice jam on the Oconto River is responsible for flooding in Oconto.

An ice jam on the Oconto river early this morning generated a flood emergency in the city of Oconto this morning. Many streets are flooded and people are asked to stay off all roads. Here is the latest river stage and forecast for the Oconto river. #wiwx pic.twitter.com/4Vzm5AIcGp

The City of Oconto has declared a flood emergency. Drivers are urged to stay off city roads until flooding subsides.

The waters have receded since Tuesday. The city is no longer asking the towns of Little River, Pensaukee and Oconto to cut back water usage.

The city says it will be out Thursday to salt and scrape icy sidewalks.

Oconto Police say free curbside pickup will be available for items damaged by flooding. Those items will be picked up either by the end of this week or next week.

On Tuesday, Action 2 News came across several vehicles stalled in the middle of Pecor St in downtown Oconto.

Our First Alert Drone captured a bus being carried away by the water.

The community pulled together to clear away as much ice and slush as they could before another freeze.

"The water has receded on and off throughout the night, but then we get some more ice jams that cause it to come back up, so basically at this point we're waiting for the ice to make its way out to the bay and then hopefully it will recede for a final time," said Sara Perrizo, Oconto City Administrator.

North Shore Bait Company in Oconto posted on Facebook that a boat was floating in their shop. "This is gonna be a tough day," reads the post.

"It's been very disheartening," says Paul Lukas, owner of North Shore Bait Company. "It's hard enough to make a living with a bait shop when you have to compete against the likes of the big stores, the box stores and Amazon, but you got to compete with Mother Nature, too."

The flood waters came in fast.

"We tried to put sandbags and stuff around it, but it got so high that it just came in and probably rose three or four feet in 10, 15 minutes," says Lukas.

"We gave it our best shot, but Mother Nature won," says Lukas.

Tuesday morning, flood waters threatened the Bay at Oconto Health and Rehabilitation Center at the corner of Scherer Avenue and 1st Street. The building is right along the flooded Oconto River.

Staff told reporter Kristyn Allen that water came close to the building, but was starting to drop by 6:30 a.m.

No one was evacuated from the rehabilitation center, but city trucks were being used to bring in workers to make sure there was staff to care for the residents.

Some Oconto residents had to take precautions and protect their valuables.

"We just went to get our deep freezer to make sure that doesn't get ruined. That was the only thing that could've gotten ruined. Everything else was in plastic totes," said Molly Boucher of Oconto.

Several roads near the Oconto River in the City of Oconto are flooded on New Year's Eve morning.

The city declared a flooding emergency late Monday night, asking people to avoid driving in the city until flooding subsided.

An Action 2 News crew in Oconto reports roads near the river have water more than a foot deep and the water is in the yards of many homes near the river.