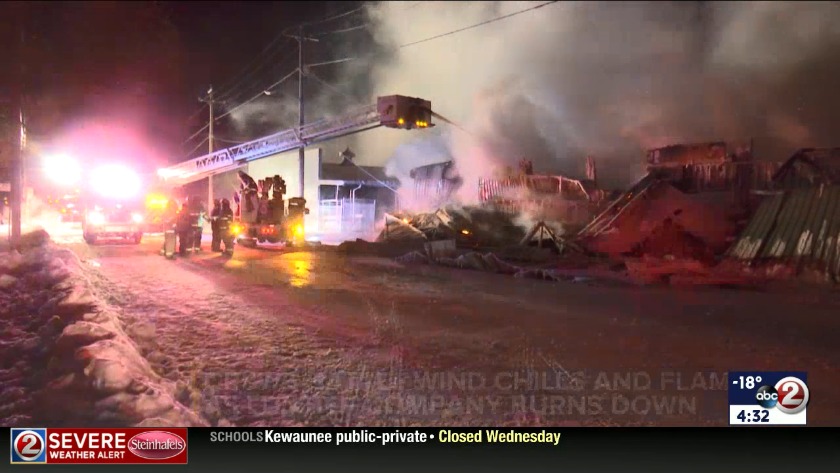 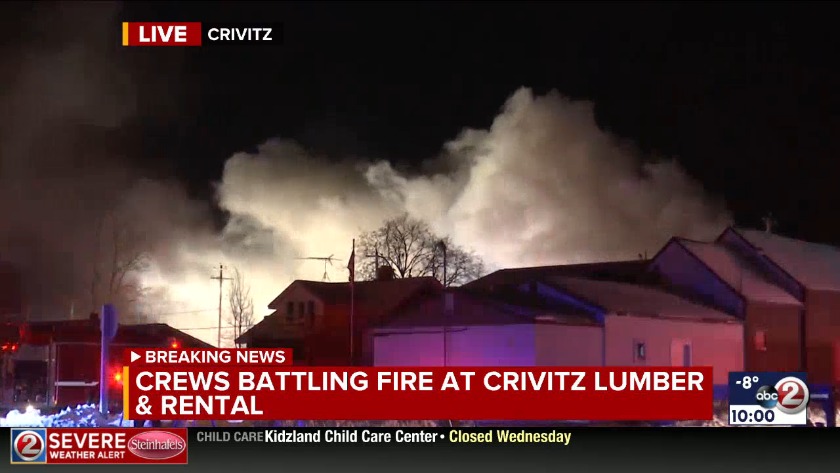 The business was destroyed, according to the fire chief. Firefighters remained on the scene well into the bitter cold morning. Wind chills plummeted to brutal feels-like temperatures of 50 below zero.

On Wednesday, the community thanked the firefighters for their help. A buffet of warm food was set up for the crews.

"We're working with other departments about taking over for when our guys are frozen up, tired and need to go," says Chief Lukas Deschane, Crivitz Fire Department. "We can rotate a different department in there, work with our neighbors to help contain this."

Witnesses described the building being engulfed, and posted pictures on Facebook of flames going through the roof of the building on Main Ave. Reporter Aisha Morales told us she could see the smoke from miles away.

Witness Steven Klein said he heard what sounded like explosions and saw the inferno.

"I said I think they're pretty well toast," Klein told us. "There were massive, massive flames coming out of that building."

More than 90 people lost power near the scene. They had to go to an emergency shelter at Village Hall.

"Like I said I was a firefighter, I've been out in some cold weather, but not nearly this bad," Klein says. "But I understand the problems they're facing and I really feel for these guys who are happy to get out there and do their job. Plus, I feel for the people who are suffering this loss of their business and their livelihood."

Wisconsin Public Service says the power has been restored.

There were no reports of injuries.

Crivitz's fire chief says the building at Crivitz Lumber and Rental is a total loss after a fire Tuesday night.

Witnesses described the building being engulfed, and posted pictures on Facebook of flames going through the roof of the building on Main Ave. Reporter Aisha Morales told us she could see the smoke from miles away.

Multiple fire departments responded. Chief Lukas Deschane says dozens of firefighters will be on scene all night. Warming stations are being provided for firefighters.

At the time of this update, the National Weather Service says shortly before 11 p.m. the temperature in Crivitz was minus-13 with a wind chill of minus-36.

The village opened the emergency shelter at Village Hall for anyone affected by the fire needing shelter. The village clerk tells us power had to be cut off for the fire response, and Wisconsin Public Service reports 93 people in Crivitz are without electricity. Those needing transportation to the shelter should call (715) 854-2030.

Chief Deschane said power could be restored by the early morning hours.

Hours later firefighters are still at the scene of last night's fire at Crivitz Lumber and Rental. @WBAY pic.twitter.com/prhfzNLqoR

The community support has been incredible in Crivitz. @WBAY pic.twitter.com/iNZhg3cO71