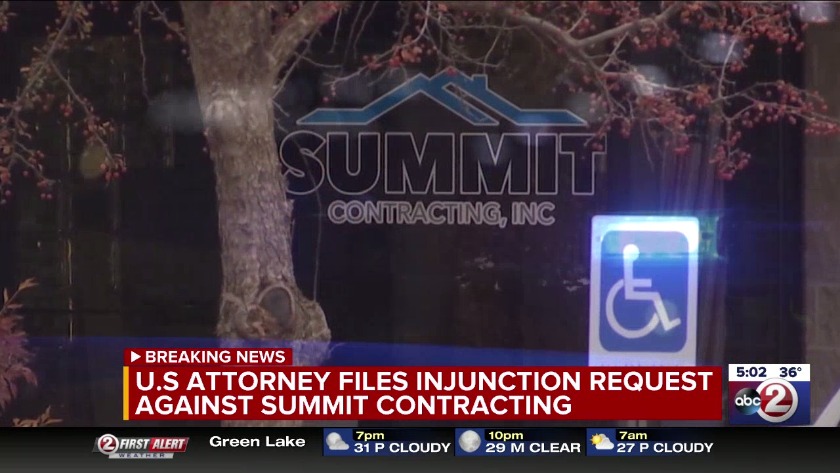 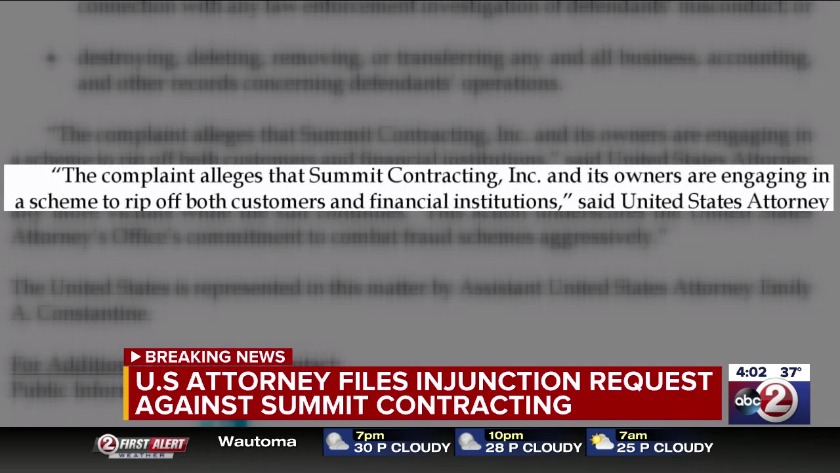 The complaint was filed based on alleged wire fraud and banking law violations, according to the United States Attorney of the Eastern District of Wisconsin.

The purpose of the injunction is to "prevent a continuing and substantial injury to the victims of fraud."

CLICK HERE to read the complaint for an injunction.

Action 2 News spent months looking into Summit Contracting after customers reached out to us for help in getting their money back. In October, our investigation broke news that the company was under criminal investigation for fraud after dozens of customers filed complaints with local and state authorities. CLICK HERE for the full story.

We found open criminal investigations in Marinette County, Brown County, and Manitowoc County. They were specifically looking into contractor fraud and theft--a felony when more than $2,500 is involved.

Complaints have also been filed with the state consumer protection agency and the Better Business Bureau.

The U.S. Attorney's Office alleges that Schampers and Smith have "conducted a fraudulent scheme that induces customers to finance construction projects, often by misrepresenting the terms of the financing offered."

The complaint reads, "As alleged, once the projects are approved for financing, defendants fully withdraw the funds for the project from the financing company before Summit completes (or in some instances, even commences) its work by making false statements to financing companies that the work has already been completed.

"When dissatisfied customers complain and post negative reviews of Summit or attempt to obtain a refund, defendants either ignore the customer or pressure the customer into removing their negative review by threatening to not complete the work or demanding that the
customer accept a partial refund that is a fraction of the amount of the customer’s loan. Some Summit customers are left with substantial loan payments for work that is not what Summit promised, or worse, never completed at all."

"We [Summit sales representatives] were instructed not to leave the [customer’s] house without the final signature from the customer saying the work was complete.

"The customer would think they were signing for the financing, but instead they were signing to the [financing company] that the work was complete. No person in their right mind would sign saying the work was complete when the sales person was still in their living room. Chad and Nate made it very clear that the sales team had to sell in ‘one sit’ [i.e., a single meeting], never speak to a customer a second time, and get that final signature [ . . . ] When I would leave the customer’s house I would
never talk to them again. The customer would get a copy of the Summit paperwork and nothing from the finance company."

The U.S. Attorney's Office also accuses Summit of making false and misleading representations in advertising to entice customers--including gift cards, entries for a $10,000 home makeover and guided fishing trips. The complaint alleges, "Summit has no intent of awarding at the time the promises are made."

Summit Contracting's Better Business Bureau profile says it has been in business since 2009. Action 2 News filed records with the state and found out the company was registered in September of 2018. That's one month before the BBB says it received its first complaint about Summit Contracting.

"... a PowerPoint presentation that Summit representatives present to customers falsely represents that Summit is an established, reputable company that has been in business since 2007, when in fact Summit has only been in business since September 2018 and has been the subject of multiple complaints to the Better Business Bureau, state regulatory agencies, and law enforcement," reads the complaint filed Friday.

The company is also accused of using high pressure, deceptive sales techniques and of making false statement about Summit services to draw in a possible customer.

The United States Attorney is requesting the court prohibit Summit, Schampers and Smith from:

• misrepresenting to prospective or actual Summit customers the terms of financing offered for Summit projects;

• requiring Summit customers to sign paperwork concerning the completion of work before Summit has confirmed completion of the work with the customers;

• threatening or intimidating any customer or former customer of Summit who posts a negative review online or in any other medium or provides information in connection with any law enforcement investigation of defendants’ misconduct; or

• destroying, deleting, removing, or transferring any and all business, accounting, and other records concerning defendants’ operations.