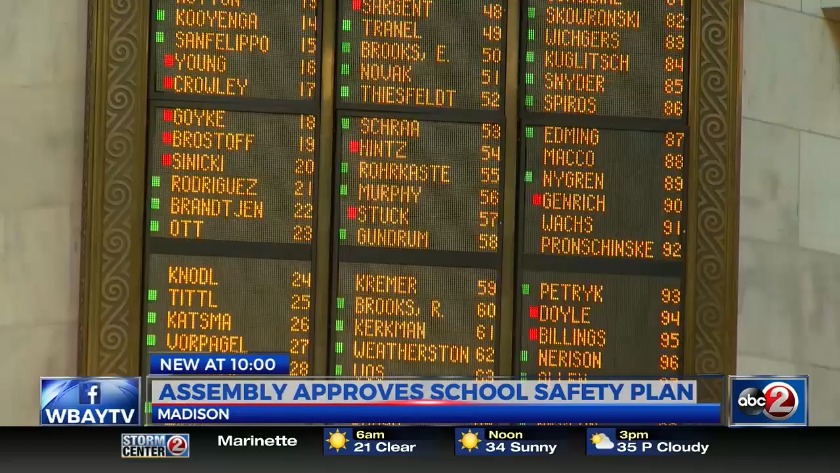 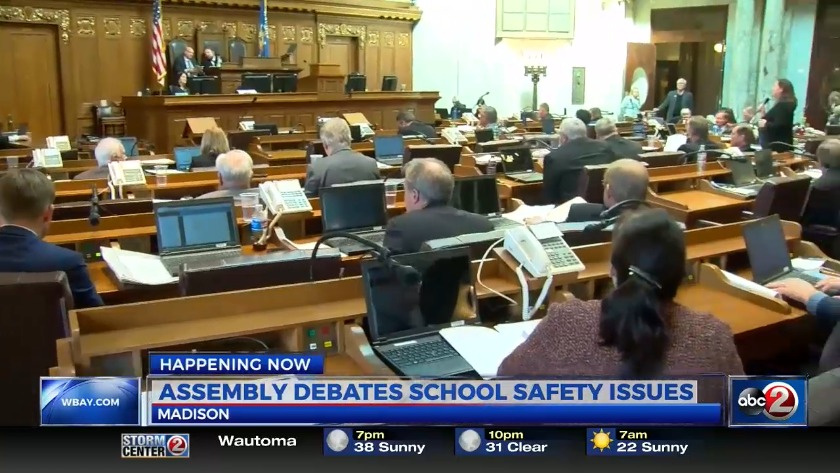 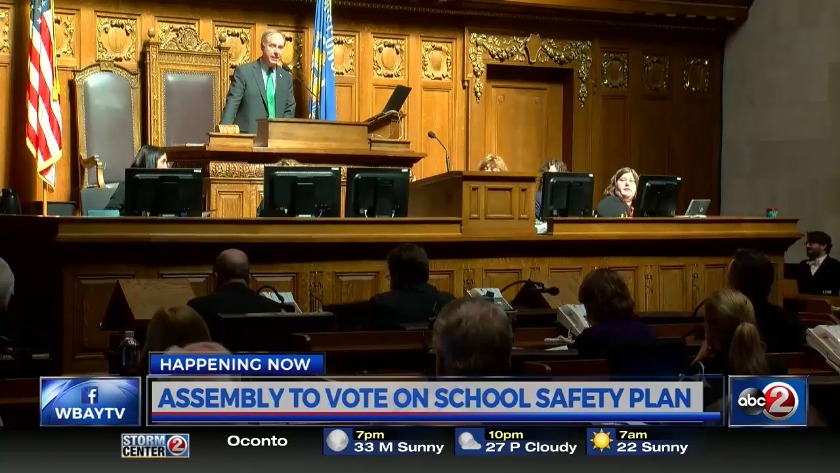 MADISON, Wis. (AP/WBAY) - The state Assembly has passed a series of school safety packages, including a bill that toughens the background check requirements on long guns.

The Assembly approved a plan on a bipartisan 78-8 vote Thursday that would lay out $100 million in grants for school security upgrades and require annual school safety drills. The Senate passed that legislation on Tuesday.

It goes next to Gov. Scott Walker who issued a statement, "This plan focuses on ways we can help schools be safe, just like we did at the federal level ensuring that every airport and airplane were safe after 9/11. The same thing needs to be true for our schools across Wisconsin. I thank the Legislature for approving this plan on a bipartisan basis because no child, parent, or teacher should ever feel unsafe at school."

The Assembly also passed two more school safety bills. One would require the state Department of Justice to conduct background checks on long-gun buyers. Right now the federal government conducts those checks but Assembly Republicans said the DOJ would consult more state databases in its checks.

The other bill would allow school boards to share surveillance camera footage with police.

Both bills call for establishing an online hotline for reporting bullying and prohibiting attackers from profiting off their stories.

The bills passed on voice votes. They go next to the state Senate. That chamber wrapped up its two-year session on Tuesday and it wasn't clear if Senate Majority Leader Scott Fitzgerald would reconvene the body to take up the bills. That led Assembly Democrats to accuse their Republican counterparts of simply trying to give themselves campaign talking points.

Assembly Majority Leader Jim Steineke, a Kaukauna Republican, wrote in a statement, "As a legislator and parent, making sure our schools are safe, our kids feels secure, and our parents feel confident in our safety measures is a top priority. I’m incredibly proud to have passed legislation that will result in our students having a more secure learning environment. It was critical to find well-rounded, multi-faceted solutions for such an important issue."

Assembly Republicans are proposing an amendment to Gov. Walker's school safety bill which would strengthen background checks, by extending requirements to long guns.

The requirement only applies to federally licensed dealers. Democrats, however, are asking for universal background checks that apply to private sales, internet sales and gun shows.

The Senate passed the $100 million school safety plan on Tuesday, but the Assembly has final say before it can go to the governor's desk and become law. If the amendment is approved, the Senate would have to vote on the amended bill.

Assembly Republicans stressed nothing in their amendment would take away anyone's Second Amendment rights.

"I guess it doesn't ban guns, so that might be one thing they want to do, but we want to address what we can address, which is really securing the school buildings, making sure the kids are safe without taking away the rights of 300-some million Americans," Rep. Steineke said.

"The reality is, we need to work on keeping guns out of people's hands that shouldn't have them. Violent criminals can access guns because they don't have universal background checks. Every Republican in the Assembly voted against universal background checks, but it's a pretty glaring omission in any part of school safety," Assembly Minority Leader Gordon Hintz, an Oshkosh Democrat, said.

The ideas in this bill were proposed by the governor in the wake of recent school shootings. It would provide grants to school districts to upgrade building safety and establish a new Office of School Safety under the Wisconsin Department of Justice.

However, some specifics in the bill have sparked disagreements between the Republican-held houses. Among them, a measure allowing schools to use the state grants to hire armed school safety officers.

"Our kids are the most important thing, because I'm a parent myself. I have two kids. They are not in high school anymore, but I still have a college-age kid. And this could happen to any type of school setting, and I want to do, again, everything I can, and I know parents feel the same way," Rep. Mike Rohrkaste (R-Neenah) said.

"I have three grandchildren in the Wisconsin school system, and I want to make sure they're as safe as possible. I know a lot of schools in my district, they have a lot of great safety measures right now, they have school resource officers, but this will actually provide them more of the tools to do some great things for our state," Rep. Paul Tittl, a Manitowoc Republican, said.

"This is really a reactive bill. It looks ready to make our schools look more like prisons, talking again about armed guards, about money making the building more secure, but nothing to really talk about being proactive. How do we stop something from happening in the first place? How do we really address the issue of guns in the hands of people who shouldn't have them?" Rep. Amanda Stuck (D-Appleton) said.

Copyright 2018 WBAY. The Associated Press contributed to this report.

"As the husband of a public school teacher and father of public school students, the issue of school violence hits close to home. This is one of the reasons I voted today to provide $100 million in grant funds to schools across the state to make security improvements to ensure they are safe for our students and educators.

"Coupled with our ongoing investments in mental health initiatives, I am confident our actions today will have a positive impact on providing safe school environments for our children."

"As a legislator and parent, making sure our schools are safe, our kids feels secure, and our parents feel confident in our safety measures is a top priority. I’m incredibly proud to have passed legislation that will result in our students having a more secure learning environment.

"It was critical to find well-rounded, multi-faceted solutions for such an important issue. With this in mind, our legislation addresses providing necessary funding, education, and structure to our school districts to make sure they can protect their students, teachers, and schools in the most effective way. Our approval of creating a $100 million School Safety Grant Program, incorporating Trauma-Informed Care and Adverse Childhood Experiences into training programs, and establishing the Office of School Safety under the Wisconsin Department of Justice will give school districts the resources they need to provide a safe school environment for all of Wisconsin’s students, teachers, and communities."

"We owe our children and communities the promise of safe school environments. Passing both houses on a bipartisan vote, the School Safety Package embodies consensus and meaningful action.  I sincerely thank Governor Walker and the Legislature for putting children first and for entrusting my team with this incredibly important task. I look forward to the Wisconsin Department of Justice being the cornerstone of school safety planning and training. The newly created Office of School Safety will work expeditiously, in conjunction with our partners in law enforcement and education, to provide necessary training and resources to make our children safer. I welcome these weighty responsibilities because I know that the Department of Justice is best suited to provide public safety leadership and expertise."

"Protecting the safety of our students, school staff, and parents is critical. I am very proud to have supported this package of bills, which will work to provide schools the resources they need to keep our kids safe. I am very pleased to see these meaningful school safety measures continue to move forward... Each of these common-sense safety measures are an important step towards ensuring the safety of our schools and communities across the state of Wisconsin."