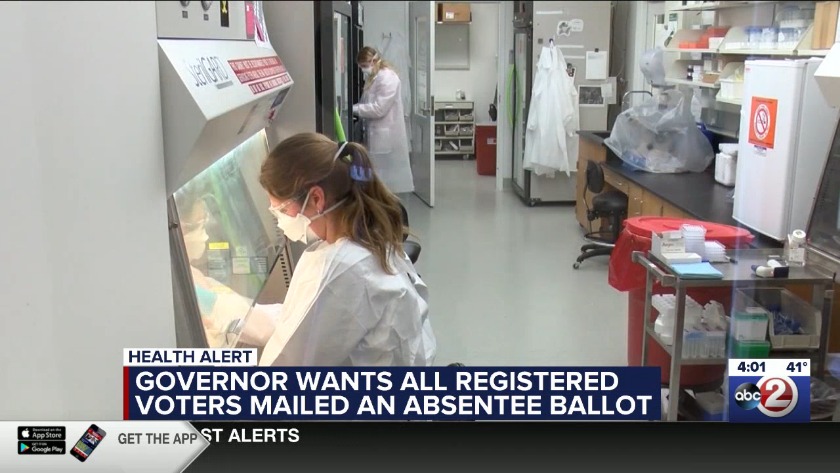 WATCH: Latest on COVID-19 in Wisconsin 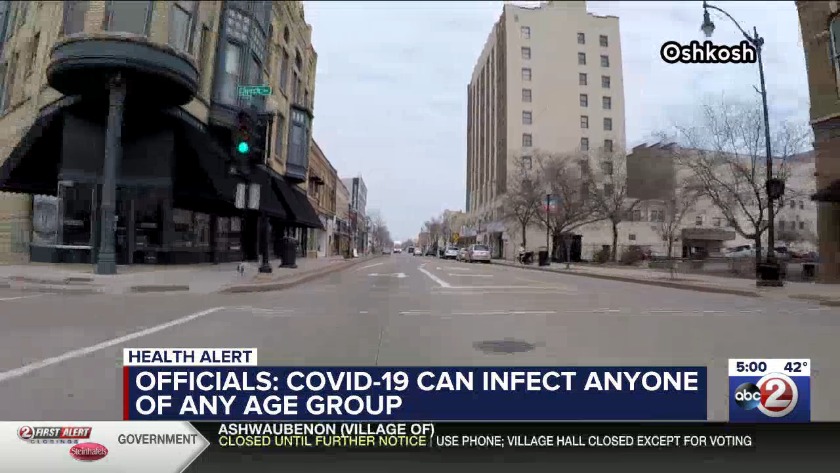 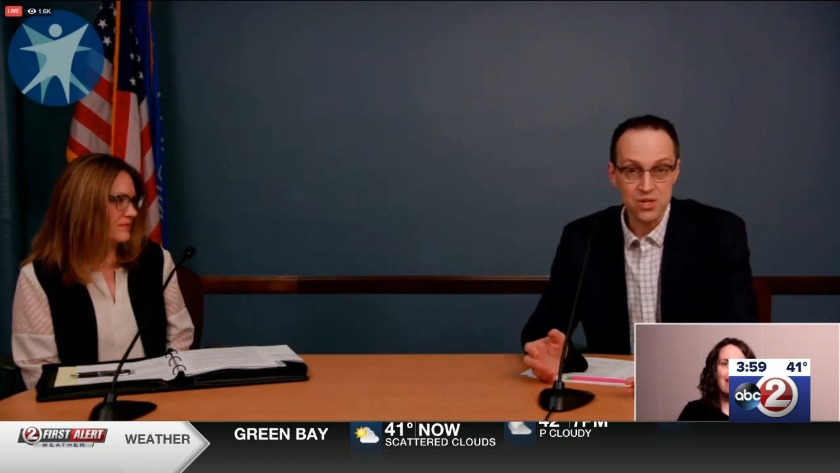 WISCONSIN (WBAY) - Waupaca County has reported the first patient in the area to test positive for COVID-19 has died, bringing the state total to 16.

State and county health department numbers show the state has 16 deaths related to complications from COVID-19.

DHS said Friday that 13,140 tests have come back negative.

Oconto County health officials are investigating how the patient in their county became infected and notifying people who had close contact. They aren't releasing any information about the patient, citing federal privacy laws.

The state Department of Health Services broke down data about the patients on Friday.

CLICK HERE TO WATCH the state's 1:30 p.m. briefing on coronavirus

These newly confirmed cases bring the countywide total to six.

Patient Five is described as a woman in her late 40s, according to the health department. The transmission is described as "community spread." That means the patient had no known exposure to an infected person and had not traveled recently.

Patient Six is described as a man in his 60s who had recently traveled within the United States.

No other identifying information about the patients was released.

Brown County has not reported any deaths linked to COVID-19 as of this publication.

Health officials say these are the second and third deaths related to an outbreak at Village Point Commons in Grafton.

Public Health Officer Kirsten Johnson says the spread of the virus has been "linked to caregiver interaction."

Johnson has ordered residents to quarantine in their rooms.

On Thursday, the Iron County Public Health Department reported the first death from COVID-19 in the county; it was also the first confirmed case in the county.

The Milwaukee County Medical Examiner's Office reported a 69-year-old Milwaukee man died Thursday evening from complications due to COVID-19 after one day in the hospital.

They were the 11th and 12th deaths from COVID-19 in the state, up from 7 cases the day before, making this the single deadliest day in the pandemic as state and local health officials reported 120 more confirmed cases of the disease.

Gov. Tony Evers says the illness has hit the north north side of Milwaukee particularly hard. "The severity of disease in the African American community is a crisis within a crisis," says Evers.

The disease is now confirmed in 41 of the state's 72 counties.

Marinette County reported its first confirmed case Thursday evening. It didn't provide information about the patient except to say the person had contact with a confirmed COVID-19 case in another county, which was not identified.

Waupaca County reported its first confirmed case Wednesday; we don't know why it wasn't included in the state's daily report. The Waupaca County Public Health Department says that patient is self-quarantined per state and federal recommendations.

Health officials say the real numbers are much higher because they're trying to limit testing, particularly focusing on health care workers or people in places with more vulnerable people, like nursing homes.

"We are not in a backlog situation," Health Services Secretary-designee Andrea Palm said, "but we need to expand our capacity to test, and we're doing that."

"Because it's a brand new infection and because the technology took some time to develop, testing is not widespread. We don't have millions of tests to do, so we've really prioritized doing these tests in these high consequence settings," Dr. Ryan Westergaard, state infectious disease specialist, said.

State health officials said most people fully recover from the coronavirus in a week or two. Twenty to 25 percent of people are hospitalized after their diagnosis. About 10 percent go into ICU.

Friday, health officials say they don't report the number of recovered patients because there is no standard way to determine and report that. Westergaard said it's hard to test whether a person stopped having symptoms but are still sick, and they don't test patients twice.

In a news conference Thursday, health officials emphasized the most likely way to get the coronavirus is from person-to-person contact. "The most important way this spreads is through coughs and sneezes and close contact," Dr. Westergaard with the state Department of Health Services emphasized.

Health officials addressed a number of questions, including whether it's safe to get food from takeout or the grocery store or eat produce other people touched. Health officials acknowledged the virus can live on surfaces for a few hours to a day but said our usual ways of getting food are still safe. Again, they emphasized the person-to-person risk is higher than touching something that might have the virus on it.

"It is a risk. It's not as risky as person-to-person contact, but it's something everyone can pay closer attention to. We can probably cut down on some of that household or community transmission," Westergaard said.

Can people get the coronavirus twice? Scientists don't know yet if being exposed to the virus once builds enough immunity.

Can a pregnant woman pass the virus to her unborn child? There's no evidence of that, because coronavirus is spread through respiratory droplets.

They also said it would take time before we see the effect of social distancing for slowing down the spread of the virus.

Test results are now being turned around in 1 or 2 days. Wednesday, 40 labs around the state were reporting data to the state.

Brown County confirmed its 4th case on Wednesday. Brown County health officials tell Action 2 News the patient is a young adult woman between the ages of 18-30. She traveled domestically and quarantined herself as soon as she experienced symptoms on March 16.

Brown County officials add she was proactive to quarantine quickly, and also got into contact with her health care provider.

At this time, county officials say they're investigating as to where she traveled, when she was tested, who she was exposed to and more.

A news release from the county emphasized that 18- to 30-year-olds need to remember no one has immunity from the coronavirus and to practice social distancing.

Officials offered few details, but said the case has been under quarantine, and officials are working to investigate contacts to the case.

Just after 6 p.m. Wednesday, Winnebago County also announced an additional case, bringing the county total to six, which was one more case from Tuesday.

Milwaukee County accounts for almost half of the state's confirmed COVID-19 cases and seven of the deaths.

Wisconsin Gov. Tony Evers has issued a "safer at home" order until April 24 to reduce the chances of spreading the coronavirus. That means all non-essential business and travel is restricted. CLICK HERE to find out what that means for you.

CLICK HERE for Frequently Asked Questions about the governor's order.

Health officials believe the governor's four-week-long order is enough as long as people adhere to the rules. They cited new numbers from China showing the number of new cases declined after a 5-week lockdown.

The state has been hearing from people reporting non-essential businesses staying open. Health Secretary-designee Andrea Palm encouraged people to read the executive order, "recognizing if we detailed every scenario, it would have gone on for 100 pages."

People can report businesses or groups violating the order to local law enforcement, which will investigate. Police have said they would rather educate businesses about the order but will issue citations if necessary.

People of all ages can get sick from the coronavirus. It's a new virus -- a "novel virus" -- so nobody has natural immunity to it.

"The virus is found in droplets from the throat and nose. When someone coughs or sneezes, other people near them can breathe in those droplets. The virus can also spread when someone touches an object with the virus on it. If that person touches their mouth, face, or eyes, the virus can make them sick," says DHS.

Older people and those with underlying health conditions (heart disease, diabetes, lung disease) are considered at high risk, according to the Centers for Disease Control and Prevention. Precautions are also needed around people with developing or weakened immune systems, including young children, pregnant women and certain medical patients.

Here's how you can prevent the spread (INFORMATION FROM DHS):

* Stay at home as much as possible. Cancel events and avoid groups, gatherings, play dates, and nonessential appointments.

* Stay home when you are sick, except to get medical care.

* Wash your hands regularly for at least 20 seconds. If soap and water are not available, use an alcohol-based hand sanitizer with at least 60% alcohol.

* Cover your mouth and nose with a tissue when you cough or sneeze or use the inside of your elbow.

* Stay at least six feet away from other people.

CLICK HERE for a guide on how to properly disinfect your surfaces.

"Get 2 the Point" podcast will address these stressful times

"Get 2 the Point" podcast will address these stressful times